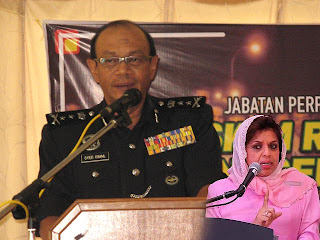 POLICE have arrested a man who allegedly tried to bribe senior officers investigating a high-profile commercial crime, which anti-graft officials say is linked to the National Feedlot Corporation (NFC) scandal.

The police obtained a remand order from the magistrates court today for the 45-year-old man.

The Malaysian Anti-Corruption Commission (MACC) said the man is now in their custody as part of their investigations into the case.

“The Commission confirms the police have handed over a man with a ‘Datuk’ title aged 45 who is remanded until tomorrow and further investigations will be conducted by MACC,” it said in a statement.

It is understood that the suspect heads a consultancy firm and runs a taxi company.

However, CCID Chief Datuk Syed Ismail Syed Azizan refused to confirm or deny if the suspect in question was involved in the controversial cattle raising scheme.

“I am not denying, I am not confirming. I’m saying I have no comments,” he told reporters at the CCID office here today.

He also refused to comment on whether the man was related to NFC chairman Datuk Seri Mohamed Salleh Ismail, husband to Women, Family and Community Minister Datuk Seri Shahrizat Jalil.

“I think even if I don’t give you his name, you already know what it is. You already know his name so you can see if his ‘bin’ has anything to do with them,” he said.

Syed Ismail said police detained the man upon receiving information that he had allegedly attempted to bribe three or four senior police officers involved in the commercial crimes probe.

The suspect was previously wanted for questioning in relation to a cheating case reported three weeks ago in Cheras as well as another case in Bercham, Ipoh last year.

He was handed over to the Malaysian Anti-Corruption Commission (MACC) today for further action.

Syed Ismail also said the police have so far recorded statements from about 27 individuals, including officers from the finance and agriculture ministries, in relation to the NFC.

He added that the investigation into the case was still ongoing and that police would haul up more people for questioning in the near future.

The MACC announced today it was investigating allegations surrounding the NFC, despite previously saying it would not probe the matter.

The national anti-graft body had earlier referred the case to the police, who are now conducting an investigation into possible criminal breach of trust.

But in a statement today, the MACC revealed that a special team headed by MACC investigations director Datuk Haji Mustafar Ali has been formed to probe claim NFC funds were misappropriated.

Following a series of exposés on the scandal-hit NFC project, PKR yesterday renewed demands for the country’s graft-busters to investigate the scheme for alleged abuse.

The party’s representatives had lodged another report at the MACC office in Shah Alam, and submitted details of what they claimed to be evidence of wrongdoing.

PKR first latched onto the issue after the RM250 million federally-funded cattle project made it into the pages of the Auditor-General’s report for 2010, which described the NFC as ‘a mess’.

Since then, the party has made several revelations related to the scandal, including the NFC’s purchase of twin multi-million luxury condominium units in Bangsar, the alleged use of project funds to finance Shahrizat and her family’s personal expenses and trips abroad.

It also alleged there was a transfer of resources to unrelated companies in Singapore, as well as the purchase a Mercedes-Benz CLS350 for RM534,622 and two plots of land in Putrajaya’s Precinct 10 for RM3,363,507.

The latest disclosure by PKR, made on Tuesday, alleged that some RM10 million was diverted towards the purchase of luxury condominium unit in Singapore for Shahrizat’s family.

Shahrizat has sought to deflect away attention by stating she was ‘only the wife’ of the national cattle farming project’s chairman and had nothing to do with the NFC.

The Wanita Umno chief has faced calls to quit as minister from within her own party, including from influential former prime minister Tun Dr Mahathir Mohamad, after repeated attacks from the opposition over the project awarded to her husband and three children, who are directors in the NFC.