REV EU, ARTICLE 153 REMARKS HAD TO BE SAID 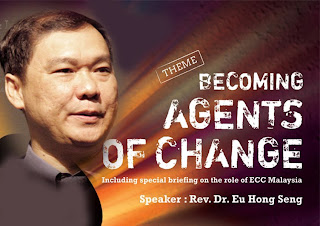 SENIOR Christian leader, Reverend Dr Eu Hong Seng said today his controversial Christmas Eve remarks about the country’s constitutional protection for Bumiputeras was something that ‘needed somebody to say it.’

He told The Malaysian Insider today that he had nothing to fear despite the fierce reaction from various Malay groups and denials by the government that Christians or any minority group had been sidelined.

When asked if he thought his speech during a Christmas Eve gathering last week was too provocative, Eu said in a matter-of-fact manner that “it is what it is”, and that “it needed somebody to say it.”

“Enough is said, there is nothing to add. There are enough MPs who are well-versed in this issue to carry on with the debate,” he told The Malaysian Insider today.

He described Perkasa’s call for him to be investigated for sedition an example of fear-mongering, adding that no one needs to be “fearful” in this country despite the vehemence from the Malay rights group

“This is not political; I am talking about the social wellbeing of everybody. It is biblical to speak up against any social imbalances,” he said.

The National Evangelical Christian Fellowship (NECF) chairman had said on Christmas Eve that the Federal Constitution’s Article 153 was akin to ‘bullying’ if it only protected the rights of one group.

Article 153 states that it is the Yang di-Pertuan Agong’s responsibility; “to safeguard the special position of the Malays and natives of any of the States of Sabah and Sarawak and the legitimate interests of other communities in accordance with the provisions of this Article”.

In his speech, Eu had stressed that he did not have problems with rights of the Malays and the Sultans but what irks many of us are the ‘shifting rights’ of the majority.

His remarks prompted demands from Perkasa Chief, Datuk Ibrahim Ali yesterday for Eu to be probed by the police.

Ibrahim said the authorities should charge those who questioned Article 153 with sedition to safeguard national security.

The Pasir Mas MP said disputing the provision would only lead to civil strife, as it was part and parcel of what he described as an established ‘social contract’ that could not be amended without consent from the Malay Rulers.

Amid the growing debate, opposition leaders have claimed that the provision had been manipulated by ruling Malay party Umno and was now being used as “a weapon of aggression”.

Constitutional expert Prof Abdul Aziz Bari had said that Article 153 meant the King must safeguard Bumiputera privileges without impinging on the legitimate interests of other communities.

Deputy Prime Minister Tan Sri Muhyddin Yassin previously denied that the provision had been used to bully any community.