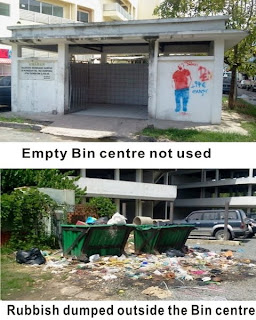 USELESS…..The empty rubbish bin centre and the rubbish dump opposite.

THE GARBAGE bin centre was not used but instead the rubbish and kitchen waste are being dumped outside on a piece of open ground. This was brought to the notice of the Sabah DAP complaint Bureau Chief, Allem Chieng during a visit to the Putatan town near the 1-Place Mall shoping complex.

The people said the bad smell is unbearable during hot weather and stray dogs always come here to dig into the garbage and kitchen waste that caused the rubbish spread all over the open ground here.

They were surprise that the garbage collection bin centre was built quite sometimes ago but never being used. The community bins should be placed inside but unfortunately these were put on the opposite side of the open ground.

Allem Chieng commented that there are much to do in Petagas and Putatan, and the new district council will have to put in double the effort to implement many projects to give a face lift to this fast developing and growing town which is so near to the KKIA and Kota Kinabalu.

The population is increasing fast and many housing developments will be completed soon, and if the various matters are not attended to, there might be a fear that these will go out of hand and difficult to control.