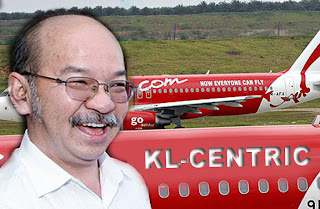 THE CANCELLATION of MAS direct flights from Japan, Korea and Australia is the latest manifestation of the ‘KL-centric’ decision-making process in our nation today. Everything must refer to KL. Now even tourists coming to Sabah must fly an extra five hours via Kuala Lumpur instead of coming direct to Sabah.

This is a most disgusting and damaging consequence of the subservience of Sabah to KL. This must change and the Sabah State Government, which labels itself as the fixed deposit of the ruling BN, has failed in its duty to protect and promote the Sabah tourism industry.

The cancellation of flights aggravates the sufferings of Sabah from other KL-centric man-made policies like the cabotage shipping policy, over centralisation of the banking sector in KL, the motor industry and trade.

Soon, travellers going east to Japan or Korea would have to fly to KL, transit and then fly westwards. After at least one hour of transit in KLIA and five hours of flying, the same passenger would be back to square one flying over Sabah on the way to Japan or Korea. MAS might as well tell the tourists to skip Sabah altogether.

When Sabah loses economically, Malaysia also loses. This is common sense. The federal authorities and MAS cannot later blame the Sabah private sector for packing Sabah tours with Brunei, Hong Kong and Shenzhen (China) to take advantage of the superior hub facilities at cheaper prices and flying time via Brunei using Royal Brunei Airlines and other airlines flying from Hong Kong and Shenzhen. This means MAS will lose this lucrative market.

The Sabah State Government and the Sabah Tourism Board shouId show their seriousness in saving the Sabah tourism industry by mounting a formidable complaint to the anti-monopoly Malaysia Competition Commission under the Competition Act 2010. It has been reported that the Competition Commission will investigate the MAS-Air Asia share swap deal that has created a super monopoly of the aviation industry, leading to reduced flights, reduced destinations, higher fares and cancellation of Tiger Air flights to Sabah.

In August this year, Sabah lost its sole representative in the board of Malaysia Airlines due to the Comprehensive Collaboration Framework between MAS, Air Asia and Air Asia X. I had warned that that was a blow to Sabah’s economy because the loss of Sabah representation has left Sabah at the mercy of the MAS – Air Asia monopoly.

The new directors who replaced Sabah's state secretary (Datuk Sukarti Wakiman) are top corporate leaders and bureaucrats based in Kuala Lumpur who see no need to fly via Kota Kinabalu. They have no experience of the frustrations of travelling within Sabah and Labuan.

But the Sabah State government dared not voice out for Sabah because our government leaders are subservient to Kuala Lumpur and are scared of losing their lucrative jobs. As a result, Sabah is now slapped with the cancellation of direct flights from Japan, Korea and Australia, which is a blatant blow to Sabah's tourism industry and the economy. I fear that there is worse to come.