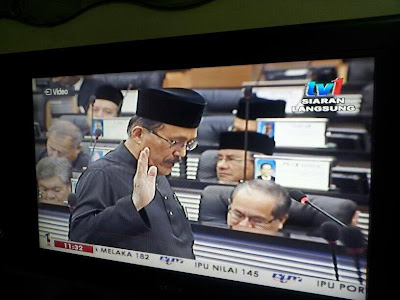 KUALA LUMPUR: All the 222 Members of Parliament took their oath of office at the First Term of the 13th Parliament which sat for the first time Monday.

The swearing-in, which was held in the Dewan Rakyat, was led by Prime Minister Datuk Seri Najib Tun Razak, who is the Pekan Member of Parliament, and followed by his deputy, Tan Sri Muhyiddin Yassin (BN-Pagoh) as well as the 131 MPs representing the Barisan Nasional (BN).

The event which went smoothly was broadcast live on RTM1.

During the swearing-in, Tan Sri Pandikar Amin Mulia was reappointed as the Dewan Rakyat Speaker after beating Datuk Abdul Kadir Sulaiman during the balloting which was marred slightly by the opposition MPs.

In the 13th general election (GE13) held on May 5, BN obtained a simple majority to form the federal government.

Unlike in the past, there was no Member of Parliament without a party (Independent) elected into the 13th Parliament.

Earlier, the election for the Dewan Rakyat Speaker's seat was marred when Datuk Mahfuz Omar (PAS-Pokok Sena) stood up to question the rationale requiring the electors to write their names on the ballot paper.

This was because before the ballot papers were circulated, Dewan Rakyat Secretary Datuk Roosme Hamzah had informed the MPs that they only needed to write the name of the candidate chosen, sign the ballot paper and fold it before handing it over for counting.

Roosme, when initiating the election session, said that balloting had to be carried out after more than one name had been proposed and seconded for the position of Dewan Rakyat Speaker based on proviso 4(3) of the Standing Order.

Pandikar Amin, from Kota Belud, Sabah, was appointed as Dewan Rakyat Speaker for the first time in April 2008.

They won uncontested after the failure of the opposition pact to submit any name for the posts within 14 days prior to the Parliament sitting today.

Yang di-Pertuan Agong Tuanku Abdul Halim Mu'adzam Shah is scheduled to open the Dewan Rakyat sitting tomorrow. The house will sit for 16 days until July 18. (Bernama)
Posted by sabahkini.net at 20:24