ANOTHER PUTSCH IN SABAH PKR 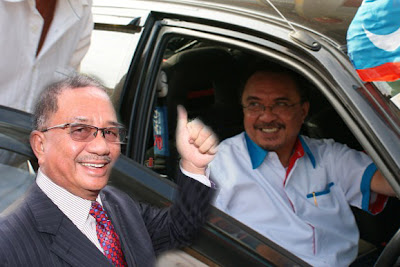 CHOICE Lajim (left) is said to be the choice as Sabah PKR Chief for most of the 25 divisions while Thamrin has been branded a flop since his appointment by the national PKR leadership. AHMAD Thamrin likely to be ousted to make way for Klias lawmaker and former UMNO warlord, Lajim Ukin to take over, say sources close to the party

KOTA KINABALU: The restless warrior from Beaufort seems not happy to play second fiddle. Just a week after being ‘appointed’ opposition chief in the Sabah State Assembly, Datuk Lajim Haji Ukin is said to be targeting the Sabah PKR leadership currently held by Ahmad Thamrin.

Sources close to the Klias lawmaker told the Borneo Insider Lajim has begun making his moves to strengthen his position in Sabah PKR with his underlings making the necessary contacts.

Already, it is said that as of to-date 19 out of the 25 divisions in the state have given their endorsement for Lajim to take over the leadership.

According to our source, a senior Sabah PKR leader who spoke on the condition of anonymity, this might take place sometime next week when a few more divisions and their heads confirm their backing for Lajim.

“We believe that Thamrin’s days are numbered,” said the source. “Even Thamrin knows that he is just warming the seat and when Lajim (and Wilfred Bumburing) crossed over to the other side, it was only a matter of time.

“But what is most interesting to see is whether the PKR leadership in Kuala Lumpur, under defector chief, Datuk Seri Anwar Ibrahim will give his blessings or not.

“It will be a severe test of his leadership as well as to the numerous promises he has made to Sabah leaders, one of them being that they will get the chance to choose the leader of their choice.

“Right now Thamrin is a KL-appointee. He does not have the full back of all the other division chiefs”.

[While Lajim said he would leave his NGO, the PPPS, which he helmed to continue his political platform after ditching UMNO last year, and apply to join PKR with his members, Wilfred, who contested and won Tamparuli on a PKR ticket, will not be doing so].

It is also believed that a KadazanDusun Murut leader from Papar has been slated as Lajim’s Number 2 should he get the vote from the divisions.

The Borneo Insider understands that the unhappiness over Thamrin’s leadership has been gathering steam, much so after the May 5 general election.

The sources we spoke to say Thamrin cold either step down and safe face or suffer the ignominy of being ‘ousted’, most likely by way of a ‘vote of no confidence’.
It was said the main reason which prompted the imminent ‘mutiny’ was mainly due to Thamrin’s lame leadership and poor performance since his appointment in October 2009.

“He (Thamrin) has no leadership quality. He’s only good for ‘fund-raising’, besides being a ‘Yes Man’. To put it bluntly, he’s just someone’s puppet. We just don’t see any hope for PKR Sabah to progress further under his leadership,” the sources said.

“But, we are confident that Lajim would be a more capable leader. In fact, this has been confirmed by virtue of his appointment as the Sabah opposition leader in the State Legislative Assembly, recently,” said a Sabah PKR divisional chief.

He further noted that Thamrin’s losing of the Gum-Gum state seat which he contested for in the last general election had also rendered him losing his mandate to lead Sabah PKR.

Besides this, the senior Sabah PKR leader also faulted Anwar for the fielding the wrong candidates in the last general elections, claiming that otherwise the party could have won more seats in Sabah.

He cited among the bad choices of candidates included Tan Sri Ibrahim Menudin who lost both the Labuan parliamentary and Bongawan state seats which he contested, and Datuk Mohammad Yahaya Lampong who lost the fight for Papar parliamentary seat, as well as an unknown figure, Fred Gabriel in the Pantai Manis state constituency.

“The fielding of some new faces from the PPPS and APS (Angkatan Perubahan Sabah) in replacement of those senior Sabah PKR leaders like Hj Ansari (former PKR Tuaran Chief) who had been working hard on the ground all these while, was another key contributing factor of the poor election result,” he added.

It is not known however how senior PKR Sabah leaders like Dr Roland Chia (Inanam) and Christina Liew (Api Api) as well as deputy secretary general, Darell Leiking (Penampang) would react to Lajim’s anticipated leadership. (BI)