JONISTON TAKES A SWIPE AT OPPOSITION 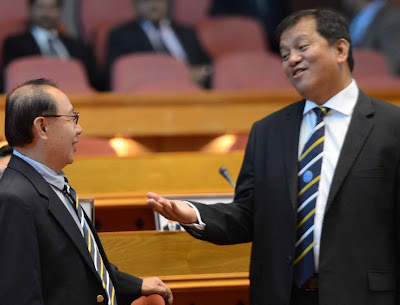 COME ON BROTHER..... Now look here, the opposition-ruled states treat BN lawmakers badly – is that what Joniston (right) seems to be telling Jeffrey.

KOTA KINABALU : Journalist-turned-lawmaker, Datuk Joniston Bangkuai took his first swipe at Opposition assemblymen by telling them not portray themselves as helpless victims bullied by the Barisan Nasional.

He said BN ministers and backbenchers were just doing their job in standing up as a united front against the opposition onslaught when it was felt that the government was being treated unfairly.

“As members of a single coalition, BN assemblymen stand under one party, one symbol and one struggle, which is to serve the people,” said the newly elected Kiulu lawmaker Sunday.

One name was mentioned in the statement and that was Bingkor representative, Datuk Dr Jeffrey Kitingan, but the statement did not refer whom Kiulu was referring to.

Joniston who is also BN backbenchers deputy whip said the practice of throwing unfounded allegations, name calling, twisting facts and figures should not be tolerated when the Assembly is in session.

“When members of the opposition belittle the BN government’s efforts, and berate its achievements, we will not just sit down and let it slip by.”

“When the opposition openly attacks one of our members with derogatory remarks and damaging allegations, we will not stand down.”

“When the opposition tells half-truths, manipulate facts and embellish figures to mislead the house, we will not be defenceless in our conduct.”

Joniston said BN representatives are treated worst in the opposition-held states of Penang and Selangor.

“May I remind the opposition reps here that there had been cases of BN reps suspended for up to six months and a year, just for questioning the Pakatan-ruled states. So don’t be so melodramatic with claims of being pushed around and favouritism,” he said.

He also said the opposition members were all given sufficient time to debate over the TYT’s policy speech.

He said a few even went way over their allocated time, including the Bingkor representative, who now portrayed himself as  the beaten dog, claiming BN ministers and backbenchers have ganged up against him and his colleagues.

“The Bingkor YB spoke for almost 45 minutes, well over the allocated time of 30 min. So how was he muffled?”

“Jeffery had more than enough time to question, advise and criticise the government, which he did. And so did all his opposition colleagues.”

Joniston said anyone who read the newspapers during the recent session would be able to discern that the opposition were given their voice judging by the number of opposition stories published.

He said the first question answered on the first day of the sitting was one posed by the opposition assemblyman from Klias.

“The government could have conveniently pushed the question further down the list with the likelihood of it not being answered orally but it did not,” he said

“Instead it gave priority and made it the first question. During the Q and A, it tried its best to answer all the questions including supplementary ones in a clear and comprehensive manner,” he said

He said likewise, during the winding up, the BN ministers tried to be as thorough in their response and still entertained queries from the opposition.

“We have no problem with suggestions, advise and constructive criticism but we will not be silent when you demean us and negate our efforts.