MONEYLENDERS THANKS TO DR MAHATHIR 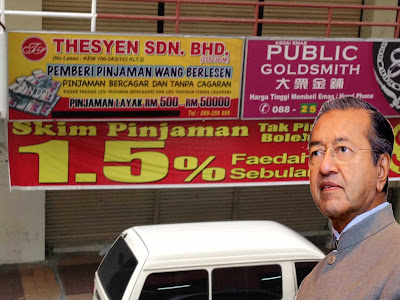 A bank union has slammed former prime minister Tun Dr Mahathir Mohamad for unleashing a flood of moneylenders in the country.

"The financial plan touted by the Mahathir administration has seen a proliferation of moneylenders.  One can see them in almost every corner of town, including rural areas. One wonders why so many licenses are issued and who are they issued to," said the Sarawak Bank Employees' Union today.

It was concerned about the high interest rates charged by these moneylenders, which could be up to 134% per year.

Actually, under the Money Lenders Act, the interest rate shouldn’t be more than 1.55 a month or 18% a year, it pointed out.

The union has long been critical of Dr Mahathir’s Financial Master Plan which forced the merger of banks and finance companies.

Its new take on it is that it has driven credit underground.

"This is because as banks get bigger, they are no longer interested in small business and micro credit.”

It said there are moneylenders charging RM410 per month for a year for a RM3,000 loan.