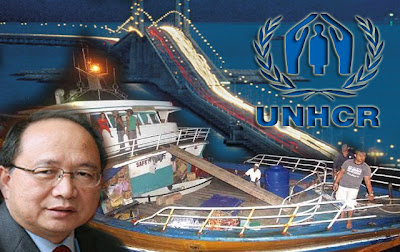 KOTA KINABALU: The time has come for all other states in Malaysia – including Penang – to share Sabah’s refugee burden, said UPKO President, Bernard Giluk Dompok.

“These are refugees, and I think we want to allow them to stay in Malaysia, but they have to be distributed among all the states in Malaysia.

“It is about time that states like Penang should be able to share our (Sabah) ‘wealth’,” he testified at the fifth session of hearings by the royal commission of inquiry (RCI) on immigrants in Sabah at the Kota Kinabalu court complex.

Bernard was responding to conducting officer Jamil Aripin’s query on how to resolve the problem of refugees who flooded Sabah between 1972 and 1984, and who have remained there since.

The RCI had previously heard that some of these people were later illegally given blue identity cards which grant them the status of a citizen (IMM13) in exchange for their votes.

Bernard, who is former Penampang MP, said the IMM13 documents issued to refugees should be done away with.

“There is no more war (in the southern Philippines), the war is elsewhere now,” he said.

He also took a more hard line position, calling for all identity cards in Sabah to be recalled and reissued so that dubious ones could be identified.

Other Sabah-based parties – such as SAPP – have instead lobbied for a Sabah identity card in line with the national MyKad to identify genuine Sabahans.

However, Jamil pointed out that withdrawing the blue identity cards of those who may have received them illegally would have far-reaching consequences.

“What would happen to those who have already stayed here for 20 or 30 years and their children, some of whom may even be working in the government now?” he asked.

At this, Bernard said the past transgressions cannot be justified on any grounds as it is against the federal constitution which has already stipulated proper procedures for citizenship.

“This is an affront to our constitution. It would be a sad day when we have to disregard the provision of the constitution just because somebody has stayed here for 50 years,” he said.

“They were never Malaysians in the first place, their identity cards should be withdrawn and perhaps they can be given a restricted permanent residence which does not confer citizenship to an individual, his children, nor his grandchildren,” he said.

Bernard who was formerly the chairperson of the parliamentary select committee (PSC) on integrity which had in 2006, investigated the illegal granting of identity cards – also submitted 10 reports to the commission detailing some of its investigations.

The Sabah veteran politician had resigned mid-way through the PSC’s investigation after the Home Ministry refused to cooperate.

Bernard said that his party, Upko, had also conducted the “biggest qualitative investigation” in Malaysia in relation to the matter, and had submitted its findings consisting of 26 volumes and 1,000 interviews.

“The 26 volumes cover 13 locations in Sabah – where 400 interviews are of real Sabahans, while 600 others are of illegal immigrants and those believed to have dubious documents,” he said.

Bernard was one of two witnesses who testified at the last day of the fifth RCI session today.

A total of 139 witnesses have taken the stand since the commission began its hearings in January this year. (Malaysiakini)
Posted by sabahkini.net at 17:34