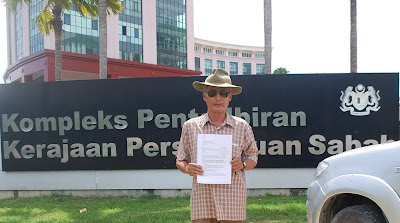 POSING .....Sindu posing with the report outside the Federal Building in Mini Putrajaya, after lodging it with the MACC recently.

KOTA KINABALU : The Malaysia Anti-Corruption Commission (MACC) here has been urged to investigate alleged abuse of power, and incompetence, by the Director of the State Public Works Department, as well as the General Manager, of Telekom Malaysia in Sabah.

The duo, according to former President of now de-registered Consumer Association of Sabah (CASH) Datuk Patrick Sindu are said to have ‘covered up’ alleged malpractice of the contractor involved in shoddy workmanship in the construction of a number of Telekom manholes.

Sindu has alleged that the flawed manholes and the laying of cables along the road shoulder of Jalan Tuaran near Taman Fulliwa, Tobobon, have been caused traffic accidents and endangered pedestrians.

In a press statement, attached with the relevant documents and photos, Sindu pointed out that these manholes which were not supposed to be there in the first place, and were not built in accordance to PWD approved specifications.

“The PWD requirements clearly state that the contractor must build the manholes at the edge of Road Reserve far beyond the road side drains, and not just inches from the road carriageway,” he pointed out.

The close proximity of the manholes from the road had unwittingly become a ‘booby trap’, posing serious risks to motorists and pedestrians, especially when their covers were missing or stolen.

He claimed that both the PWD and TM were well informed and were fully aware of the alleged malpractice of the contractor involved, and realized that these manholes had caused numerous accidents. 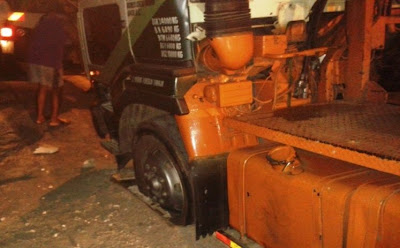 MANHOLES .....Some of the vehicles that had “fallen prey” to exposed manholes.

He said the issue had been highlighted in the local media earlier this year.

“On top of this, the two senior officers were also informed of the issue via a comprehensive letter of complaint that I submitted,” said Sindu, who added that copies of the letter were extended to the Chief Minister Datuk Seri Musa Hj Aman and Minister of Infrastructure Development Tan Sri Joseph Pairin Kitingan.

“Regrettably, up till now, no action has been taken to rectify the said flaws except for a standard reply of “our department will look into the matter and get back to you” to all attempts of inquiries.

“They (the two senior officers) have failed to take any action against the contractor involved despite knowing well that the contractor had not done a proper job. Something is not right somewhere,” said Sindu.

“Have they not learnt from the tragedy of the Primary Two student who fell in to a PWD manhole which cover was missing nearby, in October 2011, which was widely reported in the newspapers?” he added.
Posted by sabahkini.net at 13:12