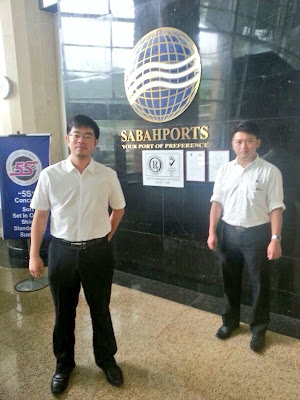 ADUN N14 Likas, Junz Wong has paid a visit to Sepangar Bay Container Port after he has received many complaints regarding broken cranes which has resulted to delay in offloading containers.

Junz was told by few forwarders that Cranes broke down regularly and each time repair could take up to few weeks due to spare parts not available. That has affected efficiency of the Port operations!

There were even occasions whereby Ships had to leave for other Ports after waited impatiently for more than 3-4days without offloading the containers.

Few matters are to be addressed by Government and relevant authorities. They are as followed:

1. According to the statement published on the website is www.insightsabah.gov.my , Sabah Port will invest RM229 million on Sandakan Port and Oil Terminal. What about investments to resolve the current pertaining woes (Cranes breaking down) of its CONTAINER terminal? How about the lack of facilities in Container terminal?

2. If Sabah Port does not have the capital ability to upgrade its port facility, should it remain privatised or should government takeover the port function in view of the fact that Sabah state relies mainly on sea movement of cargos, without the privileged alternative of rail system?

3. Sabah Port needs to come clean on its equipments and efficiency (vs West Malaysian counterparts), and contingency plan when its crane is down. As a sole provider of port service, it’s seemed like a protected monopolistic enterprise without much accountability and transparency.

4. The delay will costs Sabah consumers when shippers pass the waiting time and delayed berthing duration down to distributors who will pass to consumers in the end. Inefficiency to deliver with competitive standards is embarrassing.

5. Apparently charges imposed by Sabah Port are not cheap either. Customers are not getting value for money, and without any recourse in view of its dominant position.

6. Apparently only foreign large ships with own crane (loading ability) can offload containers. This highlights the inherent problem of cabotage policy – despite so many years of ‘protection’ our local shipping companies can only afford smaller capacity ships without own cranes. It is high time that Government must review to perhaps abolish Cabotage policy.

7. The state government harps a lot in terms of getting foreign investments into Sabah according Deputy Chief Minister Dato Raymond Tan’s many statements, isn’t it ironic if the port cannot cope with the capacity ahead due to its financial limitations?

8. The state government should re-launch the Logistics Council to examine comprehensively the sea / road linkup within Sabah, and with its trading partners rather than just paying lip service. Private sectors must be invited to the Council as they know the problems and solutions better than bureaucrats.

Junz Wong who is also National DAPSY publicity secretary stressed that One of the reasons why the Federal Government - Ministry of Transport resisted liberalization of Cabotage Policy was the inefficiency of Sabah Port to cater bigger volume of businesses.

"They are saying that it’s no point to remove the restriction if the port cannot handle the volume. This is clearly passing the buck to a privatized organization as an easy way out. Hence if this is not being taken up seriously by state government, it’ll be the bottleneck that strangle Sabah state’s economy. All the talks of success of SDC will go down the drain in due course." Junz concluded
Posted by sabahkini.net at 09:34