TELL THE TRUTH OR BE INVESTIGATED 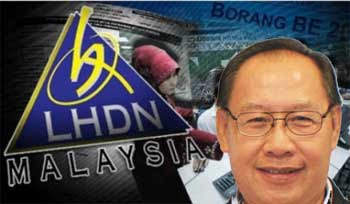 KOTA KINABALU:   “The Inland Revenue Board should be truthful about the tax revenues collected in Sabah rather than trying to cover up the truth just because Sabah is now claiming its constitutional share of this revenues” said Datuk Dr. Jeffrey Kitingan, STAR Sabah Chief, in response to front-pages stories that only RM4 billion federal tax collection was targeted by the IRB from Sabah in 2013 and not RM40 billion as reported earlier.

The RM40 billion was initially announced by the IRB Sabah and they appear to be back-tracking as if to attempt a cover-up now that Sabah is entitled to two-fifths (40%) of the net revenue collected from Sabah.

The Sabah government must do more and investigate into the matter and not be side-tracked by accepting whatever is being pushed down all the time from Kuala Lumpur.  It is the duty and responsibility of the Sabah government, first and foremost, towards the State and the people of Sabah not the political masters from Malaya.

Just looking at several preliminary figures, there appears to be basis for an amount of more than RM4 billion.   Petronas takes RM17.88 billion from Sabah’s oil and gas.

What about the major oil companies producing oil and gas from Sabah?   Sabah takes about RM1.1 billion in oil palm levies.  Sabah produces about 35% of Malaysia’s crude palm oil output and in 2012 Malaysia’s palm oil export earnings posted a value of RM71.3 billion with RM73 billion targeted for 2013.

Whether it is RM4 billion or RM40 billion, Sabah is still entitled to its legitimate 40% share!

Even assuming the lower figure, 40% of RM4 billion will increase Sabah’s budget by RM1.6 billion, a whopping 43% increase, and which will help the Sabah government and contribute to the well-being of Sabahans.

The issue of linking this 40% entitlement with federal allocations is fully of idiocy and stupidity. Firstly, it shows that Sabah BN leaders do not prioritize Sabah but the federal/BN government, secondly, that they are not acting in the best interests of Sabah and Sabahans.

Thirdly, it seems that they are more interested in bowing to their political masters from Malaya and protecting their party’s interests and their interests and positions which will be jeopardized if they go against the wish of their political masters and finally, they are just accepting whatever is being shaft down their throats without thinking and evaluating what needs to be done from the perspective of Sabah.

It also lends credence to the saying by people that Sabah BN leaders are remote-controlled by their masters in Kuala Lumpur/Putrajaya.

Its just over 1 month after being elected by Sabahans in the general elections and the Sabah BN leaders are already forgetting about the interests of Sabah and its people.  The people should seriously whether these leaders ought to continue to represent them or be booted out.

If the federal government feels that Sabah is a liability and is so difficult to reimburse Sabah’s entitlement and also to provide development allocations, it should just allow Sabah to go free and allow Sabah to manage its own revenue and resources.  There is no in point keeping Sabah which is a burden given that the federal government has got a national debt in excess of RM508 billion.
Posted by sabahkini.net at 17:28