THANKS TO SABAH LEADERS 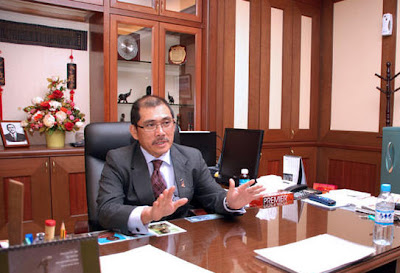 SANDAKAN: The Member of Parliament for Beluran, Datuk Ronald Kiandee, described his reappointment as the Deputy Speaker of the Dewan Rakyat as recognition for the role played by leaders from Sabah in administering the country and in Parliament.

Another leader from the state, Tan Sri Pandikar Amin Mulia was declared as the Dewan Rakyat Speaker at the First Meeting of the First Term of the 13th Parliament which started today.

“The appointment of leaders from Sabah in the national administration and in Parliament shows that the government wants everyone to be involved in developing the country,” he told Bernama.

Pandikar Amin had declared Ronald and the MP for Kuala Krau, Datuk Ismail Mohamed as Deputy Speakers of the Dewan Rakyat.

Ronald and Ismail were appointed without contest following the failure of the opposition pact to submit the names of their candidates within the 14-day period before the Parliament sitting which expired yesterday.

Ronald said he would discharge his responsibilities in line with the call by Pandikar Amin that all MPs assimilated the transformation culture in the Dewan Rakyat to elevate the dignity of the august house during the 13th Parliament term.

He said he would also use the advantage of his position to bring more development to the Beluran parliamentary constituency.

In the 13th general election, he defended his parliamentary seat for the fourth term since becoming an elected representative for the constituency in 1999. (BI)
Posted by sabahkini.net at 06:49