AMMO DEPOT, ARE WE SAFE? 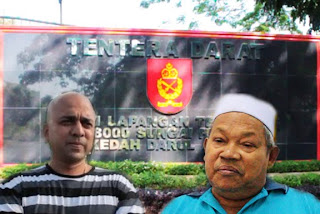 THE residents, some of whom are in the dark about the depot, want the Defence Ministry to allay their fear.

Residents living near an ammunition depot in the Sungai Layar army camp here want the Defence Ministry to assure them that there is no danger of a possible explosion.

Taman Melor and Kampung Kari Ketua kampung (Village Head) Harun Romli said an official letter from the ministry can help allay the fear, especially among those living close to the depot.

However, Harun said based on the information he has gathered, there is no immediate danger of any accident.

“We have been living here for more than 20 years and everything has been fine. There have been no complaints or problems. We are sure that the army takes the necessary precautions when handling explosives,” said the ex-serviceman who worked as an engineer in the camp.

“I myself know the characteristics of explosives and they don’t go off so easily. But the government should tell us if it is really safe and whether there is a need for us to shift,” he added.

Taman Melor, which houses nearly 400 residents, is some 300m from the depot. Further away, there are some 1,000 residents living in Taman Orkid. Many among them are retired soldiers or teachers.

When FMT visited the site recently, some of the residents and even authorities of the two schools nearby expressed shock when informed about the existence and proximity of the depot.

“We know about the camp but never knew about this ammunitions depot. I will bring this up in the next Parent-Teacher Association meeting,” said a school official from SMK Sungai Layar, less than a kilometre away from the depot.

Officials from the nearby SK Sungai Layar are also in the dark about the ammunition depot.

A new resident in Taman Melor, businessman Nor Azreen Muhammad, 37, expressed alarm when told about the depot.

“I only shifted here last year. If this is true, then we are afraid for the safety of our children,” he said.

Another resident, who wished to be identified only as Tan, said she hopes that the authorities will give her family some form of assurance.

“I don’t know anything (about the depot), we were never told about it,” added the mother of two, who has been living here for five years.

But many, like Harun, are aware and decided to put their trust in the army.

“Of course we know there is an ammunition depot, we’ve lived here for so many years but we are not afraid or worried. We know that the army has its rules on how to keep its weapons and we feel safe,” said housewife Bisharah Abdi Hamid, 55, whose husband was an ex-army man as well.

Similarly, Siti Asa Alang, 64, said: “This place is safe. Nothing has disturbed us before.”

Another resident, who declined to be named, said he wants the army to conduct frequent checks on the ammunition.

“Hopefully, they’ll have checks yearly or even monthly. The dangers are real, and I am aware of it, but I am happy to be living here and choose to ignore it,” added the ex-serviceman.

“This matter has raised some concerns. The ministry should tell us what is the depot used for and ensure everyone living nearby that it won’t endanger their lives,” he said.

On Jan 4, FMT reported that residents living close to the ammunition depot may face the danger of a possible explosion.

A complainant, M Annamalai, 37, warned that a disaster is waiting to happen based on government documents he obtained when he tried in vain to both develop and sell a plot of land, located some 300m from the depot, since 1995.

For years, documents and letters from government departments stated that the risk of ‘loss of life and damage to property’ in the area are extremely high.

However, after Annamalai’s plight was reported in the media, the government last year told him that the land is ‘safe’.

Yesterday, FMT reported that Minister in the Prime Minister’s Department Mohd Nazri Abdul Aziz has agreed to look into the matter and is scheduled to meet Annamalai tomorrow.