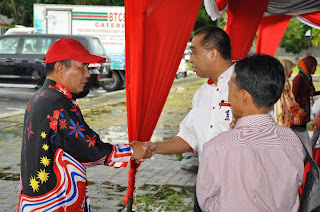 THE five months delay of Putatan District Council to pay up salaries of 50 general workers reflected that the present administration of the Sabah Barisan Nasional Government is weak and incapable to deliver, said Sabah Progressive Party (SAPP).

SAPP Vice President Dullie Marie said the Sabah BN administration system was weak because they unable to ensure that a decision to split the Penampang District Council into two could bring betterment to the workers as well as the areas concerned.

“This shown that the present Sabah BN Government is weak when it come into making decision and such problem could also affect the delivery systems, which in the long run causing much difficulties to the rakyat,” he said in a statement here today.

Dullie said the Putatan District Council should have been ready to manage its day to day administration leading to the payment of its general workers salaries.

He said the rakyat especially those residing around Putatan area would definitely wonder what actually have gotten wrong to their district council for failure to settle its workers’ salaries.

“We are talking about five months no pay here so does it make sense that it could be due to transition glitches as was said by Deputy Chief Minister Datuk Yahya Hussein,” Dullie said adding, there could be other bigger problems faced by the current administration of the State Government.

He said there is possibility that the present Sabah BN Government led by Chief Minister Datuk Seri Musa Aman is facing financial difficulties.

He added that the allocation of the salaries of the State Government staffs were already approved in the annual budget so there is no reason for five months no pay unless the government has no means.

According to Dullie, action already been taken by the relevant authority if the employer is a private company but since it involved a government agency so nobody is facing any sort of action leaving the poor 50 general workers to suffer.

Dullie said is was sad that the Local and Housing Government Ministry,Yahya who is also Petagas Assemblyman as well as Datuk Marcus Mojigoh who is Putatan Member of Parliament failed to come forward and help those affected general workers.

“How are you going to make ends meet when you got no pay for five months. Maybe the ministers and assemblymen should not be given any payment for five months and see whether they could hold on or not,” Dullie said.

He said it is no wonder that the present Sabah BN Government does not feel that five months no pay is hell unless they do not care at all about the rakyat.