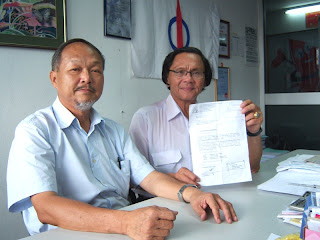 LETTER…. Hiew and Edward showing the letter of the private company.

The hawkers of meat and food stalls made the complaints to them regarding the course conducted by this private company who claimed that they were appointed by the Ministry of Health to conduct a course on the food handling and serving (Kursus Pengendalian Makanan Dibawah Peraturan Peraturan Kebesihan Makanan 2009).

The people also confused saying that this is a course conducted by a private company who is appointed by DBKK, which raised much disagreement and anger on why they were being issued the licenses by the DBKK health department on food handling and sale with a health certificate, and now there is another new training certificate is required.

The worst is that they have to spend another 3 hours to sit in a course conducted in Bahasa Malaysia which they couldn’t understand. They said now is CNY period and they are so busy, and there is no time to attend any courses, even though it is so called compulsory.

The letter from the institution asking the people to attend the compulsory course also stated that there will be a fine of RM10,000 or imprisonment of 2 years if not complied.

Hiew immediately checked with the DBKK health department and confirmed that the course was not arranged by the DBKK, and they said they have received similar complaints from the people concerned. The DBKK officer said they have nothing to do with the course conducted. DBKK has issued their own health certificates to those people handling food staff and qualified these people to handle food.

Hiew commented that there is definitely some over lapse in this type of health and hygiene training for our food handlers and hawkers. This should be the responsibilities of the local councils and DBKK.

This is unfair for those people who handle food and it gives them much headaches. He wants the health department and the DBKK to clear the matter and disallow such thing to continue. According to the person in charge of the training from the private company, they are going to conduct the same course all over Sabah.