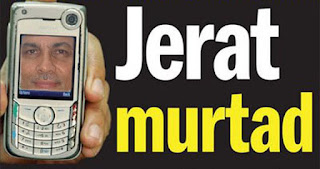 I would like to respond to Sabah PAS’s Chairman, Hamzah Abdullah in his response to my statement yesterday in Daily Express, 26 January 2011 written in Bahasa ‘PAS Sabah kecewa kenyataan SAPP’, on issue of Anti-Apostate law (my earlier press statement was published in Daily Express on 24/01/2011)

Let me briefly tell Hamzah Abdullah without indulging so much into religious philosophy.

There are a few theories so far have been practiced in Malaysia regarding the used of religion as political purpose if not for political convenience or expedience. Among others are: some say, don't ever mix religions with politics, as there are two separate things.

Some would say, Islam is everything else, it’s a way of life, it engulfs politics, economic, social, etc. And while another may say use anything or everything in moderation, even religious people would say that. Malaysia, which has similar multi religious population make up as others, is not exempted.

Based on those theories I don't know where does Hamzah Abdullah stand?

While my reading based on my acquaintance with some PAS political leaders in Peninsular, which to me Hamzah Abdullah is a bit behind time. I'm saying this in the context of politics. I know he has been longer in politic compare with me that downgrading his seniority might not be too nice to say.

I've been following the development of PAS as political party; I see how far have they’ve shifted from the unworkable PAS Islamic political model of the past into the workable Islamic model as of now. Should it remain, as it were, PAS wouldn’t be as PAS today. All it did in my view is, for the good and maturity of Malaysian politic.

Can Hamzah Abdullah not see this? I'm sure PAS leader like Khalid Samad or Sallehuddin Ayub wouldn't write a word biadap to me like what Hamazah did.

What actually word biadap is? It means in Malay tiada adap, no manner, but I think in Malay the connotation is a bit stronger than in English is.

I don't see in the Quran that Muslims are encouraged to use language like that -the so called Muslim leader. That isn’t for the good of Islam but may be for him is, for good of is politics.

Voters should take note of this. Good Muslim wouldn't do that.

In my statement did I attack anyone personally?

Hamzah said Islam religion is above everything else (agong), which means to say, above any other fields that must include politics, but in his case he was indeed politicking. This political talk with the intention is to score political mileage. To me, it looks politic for Hamzah is above religion, is he not contradicting himself?

Wonder if God treat Muslim differently because one is PAS political follower and another is SAPP political party follower or even UMNO. If Hamzah can differentiate, and if there are differences this country is doomed.

I must respond this because Hamzah said, Orang yang tidak kena jangan campuri urusan berkaitan dengan hal-ehwal Islam as if we are not Muslim or else our Islam is different in SAPP-what kind of Malaysia leader is he?

In as far as I can anticipate he can forgo his Islamic expertise and concerntrate in politics more, let see if he is not using religion as political expedience.

Let me recap what in my earlier statement (24 January 2011) was. I was merely interpreting the law of the country. I read law both undergraduate and postgraduate and I was also law lecturer at universities both local and foreign universities, thus, I think I’m competent to debate the issue given a space. Any difference in interpretations our Court of law would settle, is this not a fair proposition?

In another, where did I mention that I’m putting aside the supremacy of Islam? (mengetapi keagungan Islam?)

Where did I mention about Singapore incident in my statement?

There procedures-the laws, in running good governance, among them are: citizen’s participation, comments, and debates, open to public to study and analyze and get other views.

Didn’t you Hamzah read the history of Islamic Empire during the reign of Caliphate of Cordoba in Spain 929-1031, where all communities asked to participate, regardless their back religious background and expertise. And all but were invited to give their view before laws were passed?

If the idea of PAS Sabah is to topple BN they should be an effort to consolidate energy among opposition components and be constructive not bad mouthing. I'm sure BN components in Sabah are laughing when there is a squabble among oppositions. For me it's pure stupidity!