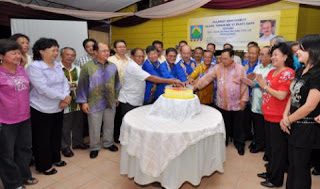 CUTTING…Yong (centre) is joined by the various SAPP leaders to cut the cake to mark its 17th anniversary celebration.

LEADERS of Barisan Nasional (BN) component parties are stooges of UMNO who are merely fighting for their own interest instead of the interest of the people, especially communities whom they claimed to represent, said Sabah Progressive Party (SAPP).

“All BN component parties like PBS, UPKO, PBRS, MCA, LDP are in office but not in power. It is UMNO who is in power. Therefore, they are subservient to UMNO who is their political master, and not the rakyat who they claimed to represent.

“UPKO, PBS PBRS claim to represent the KDM (Kadazandusun and Murut) community but almost everyday we still read in the newspapers about all the complaints among the KDM community, many things which are related to the government like, their eviction from the forest reserve and their houses burnt even though they have customary rights to live on the State lands.

Urban poverty among the KDM community too is very serious. In the civil service, promotion and appointment to senior positions are very much tilted against the KDM.

“UPKO and PBS constantly complain about the issuance of Mykads to illegal immigrants, which is still happening today, but their leaders who are ministers in the Federal and State Cabinet either don’t do anything or cannot do anything though they hold senior position with privileges and perks. They have position but no power as the power is only handled by the elites in UMNO,” he elaborated.

He believed this had caused great dissatisfaction among the grass root leaders and supporters of BN, including that of Sabah UMNO.

“We know for a fact that even many of Datuk Seri Shafie Apdal’s projects in Sabah are now stalled due to non-cooperation from the various State departments and agencies,” he quipped.

He also scorned at the BN component leaders for constantly kowtowing to and exalting their political masters in Putrajaya.

He cited the case of PBS Secretary-general, Datuk Henrynus Amin for example, who went all out to exalt Federal leaders in Putrajaya for the appointment of two Sabahans as the RTM and Information Department directors, though this was nothing new as in the past two Sabahans namely Datuk Jumat Engson and Datuk Justin Miol too were appointed to the same posts.

He also regretted that these Sabah BN leaders had been constantly brainwashed by the Federal leaders until they failed to see the “window of opportunity” before their eyes, especially when SAPP moved a motion of no confidence against the then Prime Minister, Tun Ahmad Abdullah Badawi after the March 8 ‘political tsunami’ in 2008.

“After 45 years, from 1963 to 2008, at last we see one chance for us to correct so many things that were wrong in Malaysia and Sabah in particular.

“What was the opportunity? It is in the past for 45 years from USNO era to Berjaya to PBS eras Sabahans were constantly reminded by Federal leaders that they could not rule the State without backing from Kuala Lumpur. But, what happened after the March 8 tsunami is, if KL has no backing from Sabah and Sarawak, it could not form government at Federal level and that’s a significant change.

“Since it has been 45 years, what’s wrong for Sabahans to make a demand to rectify so many injustices and imbalances in Sabah in terms of development, education, illegal immigrants, civil service, unjust policies like Cabotage Policy etc,” he questioned.

The former Chief Minister of Sabah then attributed the present ‘chaotic situation’ in the State administration which is marred with many controversies, to the presence of excessive ‘vested interest’ among those leaders in the Government and the ruling party.

On the Kota Kinabalu-Tenom railways project, Yong claimed to have reliably learnt that it was found out during a test run conducted sometime last year, the new locomotive purchased from China was too big to fit into the platform.

“If you are using a Nokia hand phone, don’t go and buy a Samsung charger. So in this case, should we change the railways or change the locomotive? I say, we change the government,” he asserted to thunderous applauds from those who were present at the occasion.

He also scorned at the State government’s recent announcement of its attempt to seek the Chief Justice of Sabah and Sarawak’s advice over the Native Certificate issue involving Sabah DAP chief, Jimmy Wong, describing it as a joke.

He contended that the State government should refer the matter to the State Attorney General, instead of the Chief Justice.

He was obviously baffled with the State government’s failure to understand such a basic principal of law of separation of powers between the State and the judiciary, despite the fact that there are seven qualified lawyers in the State Cabinet namely, Tan Sri Joseph Pairin Kitingan, Datuk Dr Yee Moh Chai, Datuk Masidi Manjun, Datuk Yahya Hussin, Datuk Azizah Mohd Dun, Datuk Raymond Tan Shu kiah and Datuk Dr Ewon Ebin.

“This is a 1st year Constitutional Law subject in the law school yet none of them understand this. To me, this clearly shows that no one wants to take up responsibility over the issue,” he said.

Yong also noted that since the Batu Sapi by election, SAPP had succeeded in taking its struggle for autonomy for Sabah to a higher level where, today everybody including national parties like BN and Pakatan Rakyat (PR) too are now talking about it.

“In the past if we talked about autonomy, we are labeled as anti national or the separatists but today everybody including the national parties like PKR, DAP and BN component parties including UMNO too are talking about autonomy now,” he noted.