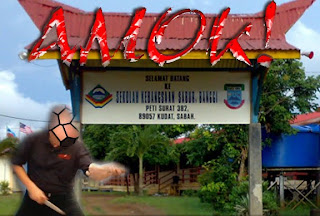 TEACHERS at a primary school here were petrified when a fellow colleague allegedly ran amok hammering on doors and walls and shouting.

Fearing for their lives, the 14 teachers, including two women, ran out from their quarters and hid among bushes near the school until he left the premises.

According to district police chief DSP Dawi Ossen, the incident took place at SK Sabur here around 12.30am when the man for no apparent reason began yelling and hitting the doors and walls of the teachers’ quarters.

Police, he said had picked up the man at his home following the incident, for further investigation.

He said the teacher had surrendered calmly without a struggle when police arrived to detain him.

“We also seized a weapon believed used by the teacher and we are still investigating the cause of the incident.

“The suspect will be remanded for four days to assist the investigation under Section 506 of the Penal Code for criminal intimidation,” he said.

Meanwhile, in Kota Kinabalu, police are still investigating an allegation by a secondary student that he was assaulted by a policeman recently.

“I have instructed my officers to carry out a thorough investigation and if the policeman acted violently on the student, action will be taken accordingly,” he said.

The incident was said to have taken place on Jan 12 when the secondary four student and five others were assaulted by a discipline teacher and a policeman when they failed to attend class.

The boy’s father, who is a lawyer, claimed that his son was slapped on the face by the discipline teacher and that he was kicked on the shin by a policeman after they were taken to the Putatan police station by the teacher.

The students had allegedly been found siting in a coffee shop opposite the school when the discipline master and two other teachers approached them.

They were then taken back to the school in a vehicle by the teachers where the assault by the discipline teacher began.

He allegedly slapped the boy’s face and started punching, kicking and slapping another student.

The students were then taken to the Putatan police station by the same teacher apparently for counselling.

A policeman then instructed the students to line up and allegedly started kicking all the boys’ legs, one by one.

Two police reports were lodged, one against the discipline teacher and the other on the policeman.