NO ANTI-APOSTASY LAWS IN SABAH 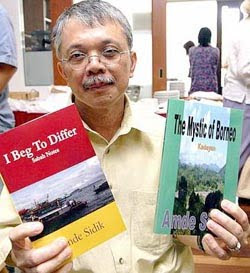 Amde, who has taught law, said that Section 64 of Title VI in the Malaysia Agreement states that the establishment or maintenance of Muslim institutions in Sabah should have the consent of the governor.

“This means that such an act should first be passed in the State Legislative Assembly,” he said.

He said that Section 65 of Title VI also states that Article 11(4) of the Federal Constitution, which allows for states to prohibit the propagation of non-Islamic religions to Muslims, shall not apply to Sabah.

“I think the public in Sabah should be allowed to make their own views known before implementing a policy as sensitive as this.

The Sabah Islamic Affiars Department (JHEAINS) has not made an effort to inform the public. This is rather an abrupt and wrong way of looking at public interest,” he said.

Amde added that it was worrying to note that JHEAINS was going out of its way to smother the state’s well-known religious tolerance by imposing its own values.

“I think the department is going a bit overboard. Is it now an agent receiving instructions from KL religious people?

“Is this a grand design to control the mindset of people living in Sabah and yet talk about religious tolerance and 1Malaysia?” he asked.

Amde was commenting on a report “Sabah to crack down on apostates” in the local media.

JHEAINS Director, Amri Suratman said last month that the anti-apostasy laws would be enforced in Sabah once its Faith Rehabilitation Centre in Kinarut is ready by next year.

Amde described the move as “one more of those steps that aim to completely erode the Malaysia Agreement of 1963″.