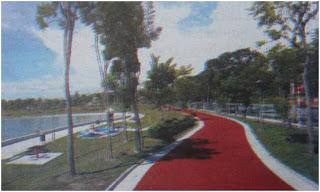 NICE to see and proud to have-a permanent gift to Sabah said the Chief Minister with regards to the 18 acres Perdana Park at Hone Place in Tg Aru which was declared open by Prime Minister yesterday.

The Sabah chief Minister got the idea from his morning walk at Kuala Lumpur City Centre during his visit to the nation’s capital.

Now the idea is materialized, the media that covered the occasion yesterday didn’t mention how much it cost. Some people said the Park is beautiful, while some said it’s shrewd idea.

Those said nice park because it beautifies Tg Aru; healthy looking convenient, suit well for certain group of people like CM. Whether the majority of the people in this area are in dire need of a park for morning walk is questionable?

Only a stone throw away, visible with naked eyes from the coastal road or from the five stars Hotel of Sutera Harbour people are still struggling to survive having no basic necessity like decent shelters -homes. Isn’t this the priority for the State government? Rakyat didahulukan?

Very many people aren’t using the facility because they are not targeted to benefit at the first place.

The irony though, adjacent to the park are properties-the condominium, I was informed they belong to the family of Chief Minister. My question therefore, wasn’t the original idea to purposely to help increase the price of the said properties at the vicinity or was this happened by coincident?

With Park like this around, sure as business-minded animal thinks the value of the properties would increase and who then are benefiting most? Let people answer this noble idea.