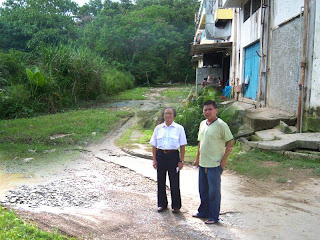 A Mr. Chong who owns two of the units here complained to Hiew and Edward that the whole area was left in its bad condition and literally being forgotten by the DBKK and other authorities for a long time.

Now they are lucky that the KK MP and the DAPs have visited the area and there will be hope that the DBKK will come to do what they supposedly had done many years ago. The people here said they are rates payers too and they deserve the same attention from the DBKK.

Edward saw the poor condition of the drains, access road, the sewerage treatment plant, rubbish dumping area and street lights were so bad and not being attended to. The drain covers are missing, and the drains are blocked and filled with garbage. The roads behind the shop units are so bad that no vehicles can use the back lanes. The access road (Jalan Mata Kuching) entering the estate is bad and full of pot-holes.

The KK MP Hiew said that the whole Delta Light Industrial Estate and the shops area needed a total repair and clean up by the DBKK immediately and he will bring up the matters with DBKK to their attention and action.

Furthermore he urges the DBKK enforcement should look into the problem of illegal squatters squatting at the area of the old staff quarters of the DBKK behind the industrial shops. These people could be some illegal immigrants (PTI) who stay and hide there.