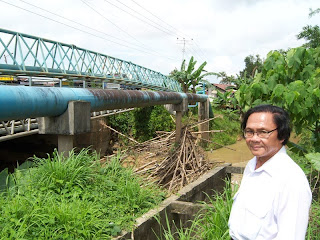 THE BLOCKAGE caused by the bundle of bamboo under the Menggatal Bridge along Jalan Tuaran is very serious and may caused damage to the bridge and the pipe/cable bridges across the Menggatal River.

Following the information given by the resident from Menggatal town, the KK MP Hiew King Cheu and Edward Ewol Mujie the Sabah DAP Vice chairman went to the location to inspect the blockage caused by the bundle of bamboo.

It is quite serious and the bamboo is blocking the water flow and thereby causing erosion to the river bank. The high voltage electricity cable pipe bridge is already slanting to one side and might collapse into the river after another heavy rain down pour.

Further downstream of the Menggatal River also needed clearing of debris and blockages. This is very important to avoid Menggatal town being flooded during this rainy days, said Edward. He advised the JPS and the relevant authorities to act immediately before something bad happened.

SESB should hurry up by sending a team to rectify the near collapse support to the cable bridge to avoid the power being cut off when the whole thing collapse into the river. This is also particularly dangerous when live cable with high voltage fell into the river and will endanger those living on the banks of the rivers.

JKR is also advised to make a check on the bridge structure to ensure the foundation is sound and save. Edward said when he stood on the bridge, he can feel the vibration caused by the passing traffic is very great and shocking. The whole bridge is really shaking.