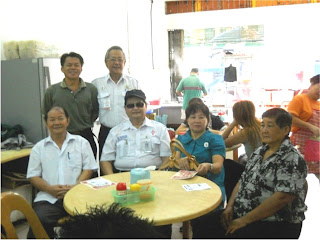 While meeting with the local communities to extend their Chinese Lunar Year's greetings, Dr Benjamin yapp and his entourage received numerous complaints from the Chinese community in Tenom pertaining to the indiscriminate hike in fuel, sugar and essential commodities that have adversely affected their livelihood.

The Chinese New year goodies were more expensive, and prices of essential commodities sold at the local market cost more compared to last year when there were no increase in prices of fuel, sugar, household products and provisions. Some of the people complained that they could hardly afford to buy the New Year's goodies to celebrate the CNY for this year.

Sabah DAP interior mobile service team also visited Melalap township. Dr Benjamin Yapp said that the local communities at Melalap were dissatisfied with the present stage of development as there was nothing new to see except the old, dilapidated shop building that was built during the British era. It was shocking to see the former Melalap railway station in a very bad shape.

The old, deteriorating railway station was an eye-sore to many visitors to Melalap. The general public wondered why the old railway station was grossly neglected, and they questioned the authority concerned who responsible for the administration, and maintenance of the Melalap township.

The sanitation conditions at the old Melalap shop and found the terrible state of deterioration, and the drainage and sanitation conditions were filthy, unhygienic and very dirty. There were filled with fungus, larva and maggots at the dirty surroundings. Why couldn't the Government improve the basic rural infrastructure and public amenities at the Melalap township after many decades of BN rule? The rural folks demanded for their basic human rights.