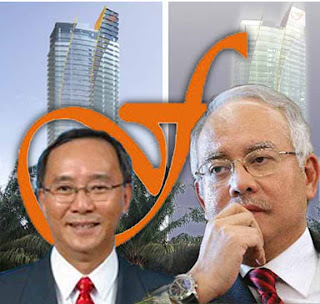 SALAM. I read with great interest today papers about your comments. In it you were quoted that those who talk bad about Felda and called it bankrupt are to be regarded as traitors to the Nation.

The sad truth is that after you took charge of Felda in 2005, you turned what was a very successful organisation into a financial nightmare. In fact you are the traitor who has stolen the poor peneroka's money.

I am sure you know that for the next General Election, Felda schemes and their votes determine about 60 Federal Parliament Seats. From my feedback, many of the peneroka are boiling mad.

They have been exploited & taken for a ride.

If what you say is true & ALL the peneroka are so happy with the UMNO/BN government, why the sudden interest in the welfare of the peneroka,

Why the many cash handouts?

1. In 2001, the cash reserves of Felda was RM4.5 billion with ZERO borrowing. Recently your Deputy Minister replied that the cash reserves has plunged to RM1.2 billion. This is despite the fact that for the past 3 years, the CPO price has been very high. If you havelooked after Felda properly the cash reseves should now be at least RM8 billion.

Said to cost RM662 million, Explain how this six star building is going to help the poor peneroka, many of whom only get nett RM500 per month. Why a huge deposit of RM235 million paid even before construction started? Why the decision was made at a secret meeting in your DPM's office in Putrajaya without the knowledge or approval of the Felda board? Recently Ahmad Maslan siad this is a very good investment as it has already made paper profit of RM300 million. Pray how did he come to this conclusion when the building is not even finished or sold!

We know that Felda has invested at least RM3 billion on these projects. We also know that since day one it has been losing money, in fact it has lost RM300 million.

Since you say we are traitors, tell us in detail what has happened .

The peneroka in Felda Keratong near Segamat are laughing, the imported cattle for the cattle project have to be kept in an air conditioned room 24 hours a day!

4. Why the need to borrow from EPF?

Before you started on Felda Global Ventures. Felda never borrowed from EPF. Is this borrowing secure? To all the EPF contributors beware, your money is used to finance many of these dubious schemes which Najib started

In August this year I visited a Felda scheme near Kemaman Talked to a peneroka who wants to sue Felda. He has been contributing to this fund for psat 17 years and has accumulated RM17,000. However when he replanted his old oil trees, he did not use the fund but used his own money instead. It has been 3 years now tried to get his OWN money back, but the Felda administration has refused so far.

Wonder why, if Felda is so well run & cash rich why can't even pay this poor peneroka a paltry sum?

In October this year, there was a report that many settlers were not happy with Felda for refusing to settle their replanting payments. So this case i quoted above is widespread and happening in many. many schemes round the country.

In Felda Kemahang, Kelantan. Felda lost the case as it was proved that Felda was not paying the proper amount sent to mill. It was a landmark case. On appeal Felda lost the case. Soon after that you visited a scheme near Bahau. Instead of respecting the court's decision you made a silly remark like Felda will engage the best lawyers & fight all the remaining cases in court. Good for you, you will make mare peneroka angry with you!

(NOTE: Dr Tan Kee Kwong Is The Son Of The Late Tan Chee Khoon. He Was Also A Former Deputy Minister Of Land And Cooperative Development.)