UNPRECEDENTED MEETING OF THE MARGINALISED 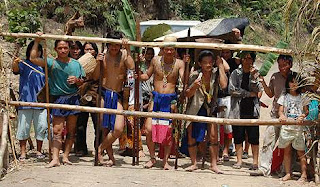 THE first-ever National Human Rights Conference on the Future of the Marginalised and Minority Communities in Malaysia is to be held at the KL-Selangor Chinese Assembly Hall in Kuala Lumpur today.

This is an event of such historical significance that one must be happy to claim credit for it. However, Hindraf Makkal Sakthi, which is taking part in the conference, was quick to dismiss any idea that it put the event together.

Hindraf Chair P Waythamoorty, who has taken refuge in London, said in a telephone call that his ad hoc apolitical rights movement was "just going along with the faceless and nameless tide of humanity", largely in Sabah and Sarawak, who have billed themselves the ‘third force’.

Waythamoorty conceded roping in the Human Rights Foundation of the United Kingdom as participant and international observer.

The third force groups to be present with Hindraf are the Human Rights Party Malaysia (HRPM), the Orang Asli and native groups of Sabah and Sarawak, Christians in Peninsular Malaysia and political parties not in the ruling BN or the opposition alliance Pakatan Rakyat.

The Sabah and Sarawak activists are pre-occupied with land and native rights, a solemn promise of the founding fathers at the inception of the Federation of Malaysia in 1963.

These promises, immortalised on the Batu Sumpah (Oath Monument) in Keningau, Sabah, are more often than not, breached.

There can be no compromise on native customs, an integral part of the Native Court System, the issue of native customary rights (NCR) land and the fact that there should be no official religion for Sabah and Sarawak.

Land rights activists in Sarawak have been engaged in a long-running war with the state authorities on NCR land. In a cosmetic exercise currently under way, the state government is using a RM80 million federal grant to survey all native land in order to demarcate them from the neighbouring state lands.

In reality, the Sarawak government is only surveying the land within the immediate vicinity of longhouses. All other parcels of native land, lying farther afield, are being treated as state land.

This is not what adat (custom) is all about. No government can go against the very laws upon which the state is founded.

Grabbing land from the vulnerable

Much of the native plight in Sarawak stems from the acquisition of their land for needless dam-building and for conversion into oil palm estates owned by cronies of the ruling elite.

Acquisition of private land for public purpose is one thing. It's a different matter altogether when land acquisition exercises are conducted to grab the properties of the most vulnerable for private purposes, with the state government in cahoots.

The federal government has been turning a blind eye to the gross abuses committed by the Taib Mahmud government in Sarawak for more than 30 years now.

Putrajaya is more concerned with Taib delivering the majority of the 31 parliamentary seats in the state. In return, Taib apparently gets immunity, even from the Malaysian Anti-Corruption Commission (MACC).

It would be interesting to hear what land and native rights activists in Sarawak have to say about the plight of the native communities.

It is learnt that the Borneo Resources Institute (BRI), scheduled to present a paper at the meet, will detail various human rights violations in the state.

These include police and politicians linking up with gangsters employed by logging and plantation companies to intimidate the rural folk into submission.

Forced conversion of children to Islam

Probably the most explosive issue in Sarawak today is the forced conversion of pagan and Christian Dayak children to Islam if they are to be issued with MyKads.

The BRI is expected to make a fuller disclosure on what it has gathered so far on the 'Islamic MyKads' for Dayak children.

Statelessness is an issue that plagues all communities, especially the marginalised and the minorities. It's a great mystery why the federal government doesn't seem to have the political will to solve this pressing problem once and for all.

One cannot leave large numbers of people indefinitely in a legal twilight zone. Having an identity is the fundamental right of a human being and a citizen under international law. The federal government seems oblivious to this fact, which has been raised time and again by Hindraf.

One national newspaper this week detailed the story of an Indian boy in Peninsular Malaysia who has been in and out of jail many times because he could produce a MyKad whenever stopped on the streets by police.

The real story is that he's stateless, just like several other thousand Indians in Peninsular Malaysia.

What's going to happen to him when he's released? Arrested outside the jail and hauled to court again? Why don't the police, the courts and the Bar Council put on their thinking caps on problems like this, instead of being myopic?

This has been the case ever since Singapore exited from the Malaysian federation in 1965. Nothing is being done to rectify this anomaly.

The larger concern of Sabahans is their continuing disenfranchisement, given the influx of 1.7 million illegal immigrants overwhelming the 1.5 million locals.

This situation is expected to be captured in a paper, Lest We Forget, to be presented by Common Interest Group Malaysia (Cigma) deputy chair Daniel John Jambun. Cigma chair Jeffrey Kitingan will be attending as well.

The Orang Asli of the peninsula can be expected to focus on land and native rights, just like those from Sabah and Sarawak.

Hindraf is expected to trot out its 18-point demand and re-visit the many issues plaguing the community.

Waythamoorthy said he would be observing the sessions via video conference, along with others from Brussels, Geneva, New York and a few cities in Australia and India. There will also be a live hook-up via the Internet.