POWER IN HANDS OF UMNO ELITE 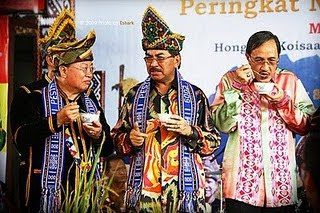 THE intensity with which PBS President Tan Sri Joseph Pairin denied that PBS is a stooge of the UMNO elite and the PBS police reports lodged against blogger Atama show that PBS is fearful of the truths. In fact, the Atama sketch of 'Three Stooges' is the common view of Sabah people.

It is a fact of today’s Sabah that political, economic and bureaucratic power is concentrated in the hands of the UMNO elite answerable only to UMNO in Kuala Lumpur. Sabahans, once a proud people as the richest state with strong leaders, have now become the poorest in the country. Tan Sri Pairin should reflect on the following facts:

1. The illegal immigrant crisis getting from bad to worse. Crimes and social problems associated with illegals continue to plague the state,

2. On a daily basis, new immigrants are being granted citizenships with Mykads. Immigrants line up to collect Mykads at Sandakan, Tawau and Semporna. Putrajaya is also issuing Mykads directly to immigrants. Are PBS’s ministers at both the state and federal levels really blind to these happenings right under their noses? Or are they closing both eyes to the rapid, irreversible change in Sabah’s demography?

3. The refusal of the BN government to set up a Royal Commission on illegal immigrants. The Teoh Beng Hock death gets a full Royal Commission of Inquiry. The VK Lingham tape (2007), the police (2004) and even the ‘Ear Squat Girl’ (2005) all qualified for a RCI. But a national security issue of massive proportions, such as the illegal immigrants in Sabah, is ignored. Who loses out? Not UMNO but PBS, UPKO and PBRS and the communities they claim to represent. Why has PBS forgotten about their demand for a Royal Commission when they were in the opposition? Because PBS Secretary General had proudly claimed PBS as UMNO’s closest friend and PBS leaders like Johnny Mositun and Herbert have earned their titles as ‘Spokesmen of UMNO’.

4. The rising costs of living that is dealing a hard blow to ordinary people,

5. The loss of agricultural lands and forced evictions of natives from forest reserves, with their houses being burned and crops bulldozed,

6. The gradual loss of cultural identity, language, adat and physical space leading to the irreversible displacement of a once dominant community, known as Kadazandusun and Muruts and other indigenous natives,

7. The discontentment over recruitment, promotions and posting in the civil service, award of scholarships and business opportunities,

8. The increasing numbers of young natives migrating to the Peninsula Malaysia, some of whom are stranded and caught up in a life of crime,

9. The coal power plant project, signed secretly in KL in February 2008 with a China contractor, and repeatedly rejected by the people and the Department of Environment but the government insists with its continuity,

10. The refusal to use our own natural gas for our power generation, instead to pipe the gas away to profit Petronas in Bintulu,

11. The Penampang Kaiduan dam mega project and the Kota Belud Tambatoun Dam which UMNO Minister Noh Omar arrogantly told off PBS YBs that the project will go ahead whatever the objections by local people. The people affected by these UMNO-mega projects are all Kadazandusuns. What have our leaders got to say about these?

Therefore, people are entitled to the genuine view that our ministers are only looking after themselves. Their incompetence has caused sufferings to the people. Look at recent examples:

1. The controversies over the Atkinson Clock Tower and Labuan ferries are glaring examples of government decisions being unduly influenced personal interests,

2. The long delays of the Tanjong Aru fly over, the airport terminal and runway,

3. The fiasco over the new rail locomotive that does not fit into the Sabah Rail platform,

4. the disgraceful loss of Queen Elizabeth General Hospital and the serious defects at QEH2,

6. The dirty water supplied by the Water Department to Sandakan people,

7. The failure to pay five months’ salaries to workers at the new Putatan District Council.

The list can go on and on. But Tan Sri Joseph Pairin is happy to just hand over zinc sheets to villagers and seeking repairs to the Keningau library air-conditioners. Other PBS ministers are best at cutting ribbons and happy to dish out ‘ang pows’ to old folks on behalf of gaming companies like TOTO. This is why I said PBS is in office, not in power.

PBS being a stooge of UMNO elite

PBS is so subservient to the UMNO elite that PBS leaders have learned that it is in their own interests to do the dirty work of UMNO. Take for instance, the illegal immigrants crisis and the Mykads issue.

PBS knows for a fact that UMNO people are behind it all. But PBS will distract responsibility from UMNO by blaming the problems on SAPP instead. For the record once again, PBS witnesses in election petition trials 1999 had already cleared SAPP members from any ‘Project IC’ and had testified by giving names of UMNO leaders in the ‘Project IC’.

But not once has PBS mentioned UMNO. PBS instead maliciously targeted SAPP. For this service, PBS is being handsomely rewarded. The power of UMNO elite over PBS is so strong that UMNO does not have to do anything. PBS will do it for UMNO. Such is the extent of UMNO power over PBS.

On the Mazu statue issue, PBS mobilized NGOs and religious leaders in praise of the UMNO Chief Minister for stopping the original Mazu project. PBS leaders took it upon themselves to set up a second Mazu project. UMNO did not have to do anything. PBS Ministers and their operatives will do the dirty work. History will remember this sort of people.

On the Saham Amanah Sabah issue, the real culprits were UMNO leaders and UMNO companies. PBS found out the truth about the SAS culprits when PBS joined the Sabah BN Cabinet in 2004. But PBS continued to accuse SAPP.

Why? Because they want to cover up for UMNO. Such is the power of UMNO over PBS. This is the same type of power over Tan Sri Pairin that he, as a green horn, took part in signing away Sabah’s petroleum for 5% royalties in June 1976.

As for SAPP’s time in the BN, we were branded as “opposition within BN’. When half of Peninsula Malaysia dumped BN/UMNO at the 2008 general elections, SAPP took the path of no return by freeing ourselves of the clutches of UMNO.

Seeing a window of opportunity for Sabah after 45 years of subservience in Malaysia, SAPP teamed up with Datuk Seri Anwar Ibrahim and his newly formed Pakatan coalition to push for change. Although the Peninsula parties were unable to mobilize sufficient strength to bring about change in the country, the fight goes on.