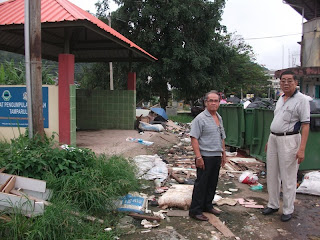 They were to observe that the complaints were valid and the rubbish collection bin centre is truly in a stage of highly disorder and smelly with rubbish scattered all over the area. The rubbish bins were not bin centre but placed outside under the hot sun and rain. The people just dump their rubbish outside on the ground and left to rot. The bins are full and not being disposed for quite some time.

The nearby shops owners had made complaint to the Tuaran District Council but still the situation has not improved. They feel that the council is not doing their job, especially the BN YBs do not border about the people in Tamparuli, or maybe they are too busy in enjoying themselves while the people continue to suffer.

Peter Liew said he does not understand why such a simple task of keeping the rubbish bin centre tidy and clean cannot be carried out accordingly by the Tuaran council. He urges the council to immediately to step up their management and the District officer should call a meeting to this effect and should also personally go round to inspect the cleanliness of the whole Tuaran district.