NEGARA, NOT NEGERI, STATUS FOR SABAH 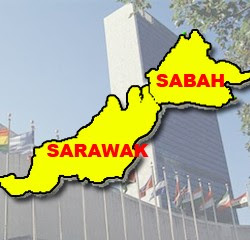 SABAH was supposed to retain its ‘negara’ or national status in a series of arrangements to ensure that the rights of Sabahans would forever be protected during the formation of Malaysia.

This little known fact was revealed at a national conference on marginalised communities, which arrested the attention of the participants.

They were told that the ideals that gave rise to the birth of a new nation in 1963 have, however, been eroded until those rights have all but disappeared.

“Sabah was given the understanding that it was to remain a national entity within the Malaysian Federation, which was to be a partnership of four national units – Sabah, Sarawak, Singapore and Malaya,” deputy president of CigMa or Common Interest Group Malaysia, Daniel John Jambun, said in his presentation titled ‘Lest We Forget’.

Elaborating further, he said: “We were to remain as a ‘negara’ (nation), not to become a ‘negeri’ (state).

“What eventually transpired was a process during which Sabah (like Sarawak) became one of the 13 states in Malaysia, no longer on the same status as Malaya, but just one of the states.”

Later, Jambun said that it was also the reason why Sabah’s head of state was officially called Yang di-Pertua Negara from 1963 till the early 1980s when the title was changed and reduced to Yang di-Pertua Negeri.

Jambun’s paper was based on a book of the same name authored by Dr Chong Eng Leong who agreed to have his book presented as a conference paper to the 220 delegates.

Chong’s book outlines the major losses Sabahans have suffered since independence due to various national policies following the formation of Malaysia.

Chong’s book focused on the ‘KL-encouraged’ influx of Muslim illegal immigrants from Indonesia and Mindanao in the southern Philippines that served to dilute the once majority Christian native population in Sabah.

Jambun charged that the federal government was being disingenuous by claiming that the state had enjoyed tremendous development and numerous benefits since the formation of Malaysia.

“Under Umno, which took over the Sabah government from Parti Bersatu Sabah (PBS) in 1994, Sabah has ended up becoming the poorest state in Malaysia despite its vast natural wealth God has given us.

“Other than the economic losses, we also suffered loss of major rights and autonomy, as listed in the book, ‘Lest We Forget’,” Jambun said.

He said that a scrutiny of the 20-point agreement clearly showed that Tunku Abdul Rahman and other Malayan and Singapore leaders had promised autonomy or self-determination for Sabah, including retaining its own revenues.

It was a promise that has not been kept, he said.

“In fact, as a strategic move to ‘Malayanise’ Sabah, the population of the state was increased drastically through dubious means, mainly through the infamous ‘Projek IC’ or ‘Projek Mahathir’, which is to give Malaysian identity cards to Muslim illegal immigrants in Sabah to enable them to register as voters and thus change the political landscape.

“Through this project, the population of Sabah dramatically rose to 3.2 million, of which 1.5 million are bona fide Sabahans and 1.7 million foreigners.

“About 70,000 of these foreigners were registered as phantom voters and distributed throughout the constituencies in Sabah to give greater advantage to the ruling BN candidates to win elections.

“This strategy was then complemented by the infamous decision to implement what is called gerrymandering of constituency boundaries to give greater representation to Muslim-majority seats, thus outnumbering the non-Muslim natives,” he said, adding that the obvious manipulation has resulted in Sabah being dubbed BN’s “fixed deposit”.

Jambun also charged that the increase in Muslim-native seats and the reduction in Christian-native ones was made with the intention of forcefully and permanently changing the state’s demography.

This way, there would be more Muslims, thus depriving others of their rights, he said, adding that the issue of disenfranchisement would be brought to international attention.

Citing the revelation in Chong’s book, he disclosed that in the 1970 census, the mostly Christians and pagan Kadazandusuns numbered 215,811, Muslim Bajau and Iranun numbered 77,271 and Malays 18,362.

He said that in the 1960 census, there was no Malay registered in Sabah, but just Bajau and Iranun.

He said that Hassnar, who is now Batu Sapi PKR head, had even revealed that there was a meeting in January 1986 chaired by the late Megat Junid Megat Ayob, then deputy home minister, detailing the mechanics of how foreigners were issued Malaysian identity documents.

Hassnar claimed that present at the meeting were former chief secretary to the government Ahmad Sarji Abdul Hamid, three top police officers from Bukit Aman, Sabah director of Immigration Dusmi Ibrahim, director-general of Immigration Halim Harun, a deputy director-general of the National Registration Department, a principal private secretary by the name of Azmin, Yahya Lampong and Hassnar himself.

“As Hassnar revealed, when one of them objected to this treacherous act, he was told by Megat Junid that prime minister Dr Mahathir Mohamad had approved it.

“This testimony was also given under oath during a trial to hear the 1999 Likas election petition filed by Chong, and that the testimony was not challenged,” Jambun said.

He added that Jabarkan, an ex-ISA detainee like Hassnar, also disclosed that there was a Sabah Umno special task force formed in 1991 to recruit foreigners who were then issued with Malaysian ICs and registered as Umno members and also included in the electoral rolls.

According to Jabarkan, office-bearers of the special task force for 1991-1993 were Musa Aman (currently Chief Minister) as director, Yahya Hussin as deputy director, Jabarkan himself as secretary and the late Malek Chua as treasurer. The team targeted 30 of the then 48 state constituencies in an attempt to oust PBS from power.

Jambun said that he doubt the current Umno leadership would dare sue those who had revealed the clandestine activities in Projek Mahathir for it would open a can of worms.