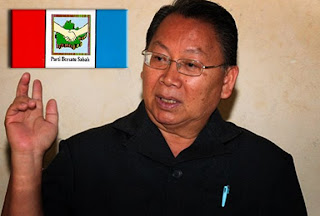 PARTI Bersatu Sabah (PBS) is against the Election Commission’s (EC) proposal to introduce a proxy voting system to enable a registered voter to be represented by an approved proxy on polling day.

PBS President, Tan Sri Joseph Pairin Kitingan said such a system was not in line with the practice of democracy in the country and if it was to be implemented, the credibility of the EC would become a subject of unending debate.

“We are constantly reminded that as registered voters, our right to vote and choose the government is very important. So, the proposal to enable someone to vote on behalf of another clearly contravenes the democracy system.

“For me, this (proxy voting) will be very confusing and will not help in enhancing public confidence in our democracy system. That’s why I hope that this proposal will not be implemented,” he said after visiting Tanjung Market here today.

Pairin was commenting on the EC’s proposal to implement the proxy voting system to allow those who are unable to be present on polling day to have their votes cast by approved proxies.

Pairin said whatever mechanisms proposed by the EC to implement the system, they remained impractical.

He added that even the electronic voting system practised in the United States was deluged with problems.

“Let alone if the proxies can represent not one or two or five, but up to 100 registered voters. How is this possible?” he said, adding that the EC should just drop the subject. (Bernama)