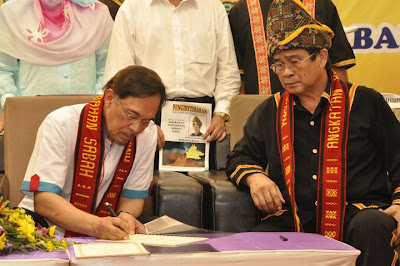 TUARAN: Former MP and Deputy President of UPKO, Wilfred Bumburing, who won a Sabah state seat on a PKR ticket in the recent general election has rejected opposition leader Anwar Ibrahim’s advice to join the party.

Sources close to Bumburing said the veteran leader is instead weighing an option to lead a state-based party either by joining an existing entity or one that is about to be registered.

A leader close to him, told FMT here today that Sabah PKR leaders aligned to Bumburing too wanted him to join PKR but he has decided otherwise.

“Actually we were expecting our former party UPKO (to join Pakatan Rakyat) but its leaders are now reluctant to leave the Barisan Nasional … not in the near future,” said the leader who asked for anonymity.

According to him that leaves Bumburing with the option to get a party registered before the next general election.

However many in his circle, claim he still harbours the wish to get UPKO leave BN and join the opposition.

Bumburing, he said, does not let party members forget that UPKO could have become the single largest political party after Umno had Dompok listened to him that it ought to leave BN and contest on its own under Pakatan in the last election.

He further claimed that Bumburing too had been advising his staunchest Kadazandusun supporters in Tuaran not to join PKR yet but wait for “a new house they could call their own”.

He however failed to keep the Tuaran parliamentary seat against UPKO’s Madius Tangau who won it comfortably for the BN.

Bumburing believes that Dompok could have retained his seat easily had he been with the opposition.

The other MPs from UPKO are Ewon Ebin of Ranau who has since been appointed a Federal Minister for Science, Innovation and Technology, and Putatan MP, Marcus Maklin Mojigoh.

Bumburing is leading a political NGO called Angkatan Perubahan Sabah (APS) that Anwar recognised as “member” of Pakatan  prior to the last general election, but changed his tone since then to say that Pakatan is made up only of PKR, PAS and DAP. (FMT)
Posted by sabahkini.net at 09:45