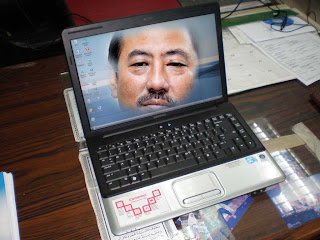 SABAH Progressive Party (SAPP) questioned the rationale to provide computers first to the people of Pulau Banggi, Kudat, one of the most impoverished areas in Sabah.

Information Chief, Chong Pit Fah said the picture of a shirtless old Bonggi man holding a computer notebook while sitting in front of his house door that was published in the newspapers clearly sent a message that he needed a better shelter more than the gadget.

“It is a big insult to the people of Sabah because computers are not the pressing need for the people in Banggi or other poor areas in the State for that matter but better shelters and basic amenities,” he said in a statement here.

He was commenting on the picture published on Friday in conjunction with Information, Communication and Culture Minister, Datuk Seri Rais Yatim’s visit to Karakit, Banggi Island to launch the distribution of 1Malaysia computer notebooks and Postal Transformation Plan for Sabah and Sarawak.

According to Rais, 500 1Malaysia notebooks had been given away in Kudat including 100 units in Banggi Island.

“Of course, giving free computers to the people especially school children to enhance knowledge and education through ICT is something good but can’t the government set the priority right?” he asked.

Chong said the image of the old man and house made of leaves also sent a message that Sabah is a poor state and more needed to be developed, particularly rural areas such as Banggi.

“We don’t even know if this old man’s house and his neighbours have electricity supply or not and yet you are telling people that there is internet connection there?” he asked.

SAPP believed the BN government was acting irresponsibly and only trying to please the eyes of the people without thinking that the people are now more matured and wise enough to judge if the move really benefitted the poor.

“Is this the way the BN is tackling the hardcore poverty incidence in Sabah? SAPP believes these poor people are yearning for a better house and basic amenities like electricity and water supply rather than computers,” he said.