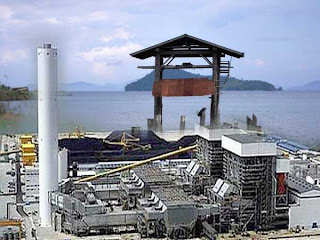 GREEN activists in Sabah are getting increasingly jittery as the authorities play hide-and-seek with public opinion on a proposed 300MW coal-fired power plant in Lahad Datu.

They turned up at three places two in Kota Kinabalu and one in Lahad Datu yesterday to express their concerns over the controversial project.

Prime Minister Mohd Najib Abdul Razak, who was in Kota Kinabalu yesterday, was again prevented by his aides from receiving a memorandum on energy options for Sabah put together by Green Surf, an alliance of anti-coal NGOs in the state.

Green Surf activist Cynthia Ong expressed fears that Najib may not be getting the correct information on the plant.

"There are local, national and global movements against this plant. All we wanted was a few moments of his time to explain our stand," she said.

This is the second such disappointment for the movement which wants to put the premier's 'People First, Performance Now' administration to the test.

Activists had visited Kuala Lumpur last month where they tried to corner Najib in Parliament House, with a memorandum for him. However, he gave them the slip as his aides tied up the activists in delaying tactics.

Yesterday, too, more than 400 villagers from Kampung Sinakut and Lahad Datu protested with banners at Sinakut, the proposed site of the plant in their area or anywhere else in the state.

They were led by Kampung Sinakut chief Jimi Uddin, 55, who denied that they were in favour of the coal plant.

"The authorities claim that we are squatters and will be relocated to Sungai Merah which is away from the sea," said Jimi who has been living in the village since 1970.

"We are fishermen and we depend on the sea. We also have seaweed farms which help us out with extra income."

The villagers wanted their demonstration to coincide with Najib's visit. They hoped that their message - 'we are not squatters, no to the coal plant, no to relocation' would get through to the Prime Minister.

"Over 200 people drove up from Lahad Datu to express their solidarity with the villagers of Sinakut who will be uprooted to make way for the project," said Vincent Ng of the Sabah Environment Protection Association, a component of Green Surf.

He said the people of Lahad Datu also want to impress upon the Sabah Electricity Sdn Bhd (SESB) that they are strongly opposed to the plant . He noted that the east coast town will be the first to experience the negative environmental impact of the 'dirty energy' option.

"Briefing after briefing, and all they do is raise even more questions than relieving us on our concerns," said WorldWide Fund for Nature (WWF) Malaysia policy analyst Lanash Thanda.

"We want to know that no local community will be affected adversely. The state government has promised sustainability and conservation while promoting tourism."

Lanash wanted panelists at the Open Day to share with participants the details on the type of coal mined, the company that would be dealing with the trade and the exact location of the mine. But she was brushed aside by a panelist with the excuse that "SESB has nothing to hide and furthermore, nothing can be made public due to commercial considerations".

WWF, a Green Surf member, is not only concerned about the community in Lahad Datu but also that in Kalimantan which has been tipped to provide the coal for the plant, according to Lanash.

"We have to think globally and ensure that we don't create problems in Kalimantan in addition to those in Lahad Datu."

Lanash expressed the worry that Sabah had no definite energy policy and was going from crisis to crisis "based on a bundle of contradictions".

She noted that SESB's excuse was that the state does not have sufficient biomass and LNG reserves but, at the same time, it is prepared to embrace coal which cannot be mined in Sabah since the only known reserves are in the Malaiu Basin, a world heritage site.

"Why ship our gas to Bintulu (Sarawak) and Japan and end up buying a dirty commodity like coal from Kalimantan? These are questions to which the panellists could not provide any answers. We are being kept in the dark," she said.

Lanash stressed that Sabahans are losing out in terms of jobs and contracts in the petroleum and petrochemical sector as the resources are being exported to the benefit of other places in Malaysia, including several states without oil reserves, and to other countries.

She expressed dissatisfaction with the manner in which the Environmental Impact Assessment for the proposed coal plant had been carried out.

The methodology used was that for coral reefs, according to her, while Sinakut was largely nipah swamp and mangrove until the late 1980s "which means the bottom is still muddy".

Sinakut is important for prawns and fish breeding, said Lanash, adding that most of Sabah's prawns and lobsters come from here.

A panelist inadvertently let the cat out of the bag when he admitted that the proposed coal plant would not use clean coal technology as trumpeted in the media by the Sabah power monopoly. Instead, the plant would now meet "Department of Environment (DOE) standards".

"If you are not using clean coal technology, how can you say that you will be meeting DOE standards? It does not make sense."

"The 25-year life span of the coal plant and technology will give SESB the breathing time needed to consider alternative energy options," he said.
Posted by sabahkini.net at 00:07