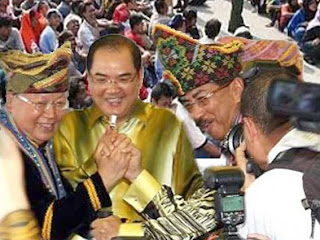 PARTI Bersatu Sabah (PBS) wants all illegal immigrants in Sabah to be deported by 2012, a deadline set by its president Joseph Pairin Kitingan late last year.

The party was clarifying its stand on the issue after the opposition had alleged that it supports the 'illegals for hire' proposal by the Human Resources Ministry.

The party added that it would not compromise on the nation's sovereignty and security. Both are under attack by the continuing influx of illegal immigrants into Sabah according to the state's oldest political party.

"Malaysia should also persuade the home countries of the illegals to prevent their nationals from emigrating without proper travel papers," said Johnny Mositun, the PBS information chief. "Regularisation of illegals to enable them to work here should only be the last resort."

The steps outlined, he continued, were the proper way forward "to start towards a final solution to the problem of illegal immigrants" in Malaysia in general and Sabah in particular.

Mositun, also the Sabah state assembly speaker, denied that he had ever called for regularisation of illegal immigrants per se as alleged by Sabah Progressive Party (SAPP) president Yong Teck Lee. The SAPP chief, he claimed, had quoted him out of context when he earlier responded to a proposal to raise the levy for foreign workers.

If the federal government insisted on raising the levy for foreign workers, the senior PBS leader reiterated, the state might be forced to go slow on the crackdowns and even consider some sort of amnesty or regularisation "to prevent economic chaos".

Sabah has 1.7 million foreigners, mostly illegal immigrants, and is highly dependent on them for labour, he noted

Touching on Yong's allegation that PBS was in fact "highly confused and inconsistent" on the issue, he denied that this was ever the case. The party, he assured, was quite capable of differentiating between the case of migrant workers and illegal immigrants.

"The solutions are different," said Mositun. "In the case of illegal immigrants, the first option must be detention and deportation. We have never suggested that this be the last resort."

In a revised take on the issue of illegal immigration and migrant workers, the PBS information chief disclosed his party now wants all recruitment of foreign workers to be conducted on a government-to-government basis. The present system of going through private labour recruitment agencies at both ends, he stressed, was subject to much abuse, and was costly and inefficient.

He did not dwell on recurrent complaints that most of these agencies are linked to various BN component parties through nominees of senior politicians.

"The opposition should suggest ways to help us get rid of the illegal immigrants," said Mositun. "It doesn't help to make comments just for political mileage."

Opposition parties meanwhile stand by their observation that Pairin is responsible for the "illegals for hire" proposal. The PBS chief, they stress, had asked for a laboratory to be set up to study the issue of illegal immigrants.

The outcome was the illegals for hire proposal endorsed by the Human Resources Ministry.

Pairin, they said, had insisted that illegal immigrants come under the Government Transformation Programme (GTP) which incorporates the National Key Result Areas (NKRA) and the Key Performance Indexes (KPI). The illegals for hire proposal, according to the opposition, is just to make federal government statistics look good.

SAPP information chief Chong Pit Fah, in an immediate response, said it was not the done thing for Mositun to be concentrating so much on policy matters when he was the Sabah state assembly speaker.

The issue of the illegals, he recalled, was among the "14 Points on Sabah" memorandum the party presented to the federal government before it pulled out from the BN in late 2008.

'Musa should be held responsible'

Kota Kinabalu MP Hiew King Cheu thinks that Sabah Chief Minister Musa Aman, as chairman of the state security committee, should be held responsible if the issue of illegal immigrants is not resolved.

"It's pointless to detain and deport illegal immigrants," said Hiew. "They will be back in Sabah within two days."

Illegal immigrants are now provided with free food and health care at the detention centres - Rumah Merah or Red House - and then taken in air-conditioned coaches to the deportation points for a free trip back home, he added. "If Sarawak can handle illegal immigrants - estimated at 260,000 out of half a million foreign workers - why not Sabah?"

For starters, the MP wants the authorities to stop issuing IMM13 Immigration Department documents to the children of the refugees from the southern Philippines. "The region is now peaceful," said Hiew. "Why allow them to still stay here? There are already 85,000 now holding the IMM13 compared with the original 50,000-odd."

Former home minister Syed Hamid Albar had once said that most of the original IMM13 holders, if they had not passed on or returned home, had been offered permanent residence by the federal government. He did not say whether the Sabah state government had been consulted on the matter as required by the federal and state constitutions.