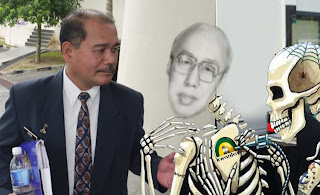 Q152 : What is your present designation with the government ?

Q153: Did you serve as director of Native Affairs Sabah in October 2007?

Said Hinayat :I can’t recognize this person because there was a lot of people that came to see me.
Q156: Can you explain to the Court what is the meaning of paragraph 2 of your letter?

Said Hinayat : Paragraph 2 means “the named above” but I don’t recognize them.

Q157 : What was your basis for issuing this letter confirming all the four persons named as natives of Sabah?

Said Hinayat : I received a letter from District Chief stating that the native certificates of the four name above were in order.

Q158 : Did you yourself make any inquiry or investigation as to whether the four persons names in IDD4 were in fact natives of Sabah?

Said Hinayat : No. I fully depend on this letter.

Q159 : Do you have a copy of the letter from the District Chief that you mentioned in your evidence?

Q160: Do you have the original of this letter?

Said Hinayat : No, only a copy.

Q161 : Can you inform the Court where is the original since this letter was address to you?

Said Hinayat : In the office file.

Mr Ansari: Apply for this letter to be marked as ID since it is not the original neither he is not a maker.

Said Hinayat : No. Nobody informed me.

Cross-examination of PW6 by Puan Suzannah:

Said Hinayat : As I stated earlier I don’t recognize this person and as there was so many people came to see me and nobody told me that this person was no longer alive.

Q164: If you don’t recognize them how you can say that they came and see you?

Said Hinayat : So many people came to see me regarding the same matter so I put in my letter “penama-penama telah datang”.

Cross-examination of PW6 by Puan Zaleha:

Q165 : Refer to D4. Can you tell the Court why did you address the letter to Pengarah Jabatan Tanah dan Ukur, Kota Kinabalu?

Said Hinayat : This letter address to Pengarah Jabatan Tanah dan Ukur because they usually asked for this letter.

Said Hinayat : As mentioned in the letter.

Re examination of PW6

Q169 Can you recall who exactly ask for this letter?

Said Hinayat : I can’t remember but the aim for this letter is regarding the four names above.

Q170 : Can you explain why you specifically address this letter to Director of Land and Survey Department?

It would be an offence if he allows the workers to leave the employment of the 2nd Plaintiff without revoking their work permits and sending them back to their country of origin.

He also needs to mobilized the 2nd Plaintiff’s machineries and equipments, food supplies, fuels and other lubricants and related items from the quarters that were built by the 2nd Plaintiff.
In view of all these he asked me to inform the Court that he can only surrendered possession in two weeks time.

I was informed earlier that while I was taking instructions from Mr Hiew that your Lordship had indicated to the parties that the application filed by 1st and 2nd defendants earlier today would be disposed off after completion of the testimony of the subpoena witnesses. I humbly beg the Court for the Plaintiff’s to be allowed to continue with the trial since it had been 11 months that the order was made for retrial by the Court of Appeal.

On behalf of the 5th and 6th Defendants who are in Court because they were dragged in by the 1st, 2nd and 3rd defendants, we also apply for the proceeding to continue since three days has been reserved in this matter and both of them are not parties to the dispute between the Plaintiff and the Defendants.

The 5th Defendant is a businessman who was awarded a Justice of Peace by the Head of State and he is living for the past five years under a cloud of allegation of fraud and conspiracy brought by the 1st,2nd and 3rd defendants. He wanted his name to be cleared as soon as possible as his good name and reputation is at stake. These have cost him to suffer undue distress and embarrassment. If your Lordship is minded to adjourn the proceeding by the Plaintiffs than this suit should be separated and the Counterclaim should be tried forthwith.

Mr Tsen: We have been served by the application by the Defendants for stay on the retrial and has not been fixed yet. Pending the disposal of this application the Plaintiffs should be allowed to continue to give evidence so that we can close the Plaintiff’s case by tomorrow. Unless and until the Court makes an order to stay the retrial time should be wasted and this matter should proceed.

Court: Application directions or stay by all the Defendants will be heard at 2.30 p.m.

(The rest of the page is intentionally left blank)
Posted by sabahkini.net at 22:41