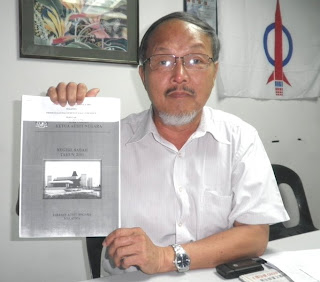 IN the Audit General for the year 2001, a Section 73.5 which highlighted with the comments made on the Sabah Ministry of Finance in relation to the development of the government civil servant quarters area in Tanjong Aru, Kota Kinabalu.

The report stated with details from the Audit General as follows:-

“In the agreement of the development project, the land area under the government of 128.42 acres will be handed over to the developer. It is with approved land area of 117.37 acres is divided into 12 lots. The land titles (grant) for 10 lots have been issued, and the other 2 lots are still under the issuing process. There is no work seen started now on the site.

The development plan had been handed over to Jabatan Kerja Raya (JKR) for checking and approval, and until May 2001 there was still no news from JKR. The delay had caused the cost of the project to increase on the re-housing of the civil servants during May 2001 on wards at a total cost expenditure of RM2.10 million.”

(1) The land titles for 11 lots out of the 12 lots had been issued and deposited at the Ministry of Finance Sabah and 1 lot was still under the issuing process.

(2) The development plan and building plan for the development were being checked by DBKK and JKR. It is understood that the project will start in July 2002, and during this time the government will not pay for the houses rented by the government officers at RM1,500.00 per house.

Sabah DAP received many complaints from the general public on the reason why such a big piece of government prime land which had been quietly handed to a company to develop.

That is why the Audit General had come up with a report to high light the issue in its 2001 report. The question is who actually arranged this piece of 128.42 acres of government land to a private developer, and it is believed that this ended up in a court suit between the designated develop and the government.

Can a large state land be simply given to private company to develop and what is the benefit as far as the state government is concerns? Is it in line with the local government and the land ordinance, has they any conversion on the land use been approve or gazette.

It is learnt also that the government had incurred much loses and ended up paying for the civil servants to rent houses elsewhere. Due to the demolition of all the quarters in Tanjong Aru near the beach and opposite the Tanjong Aru Plaza, the whole area is now becoming a jungle, overgrown with bushes and trees. Even though if the government recovers the rights over the land, what comes next, another developer? We hope the government can do thing in a more transparent way.

As for this case, we hope someone in the government or the Chief Minister Datuk Musa Aman will explain to the people of Sabah because this is of importance to the interest of all Sabahan. There shall be no cover up, we want the truth on the whole thing.
Posted by sabahkini.net at 23:27