SABAH DAP TO LIVEN UP KUDAT 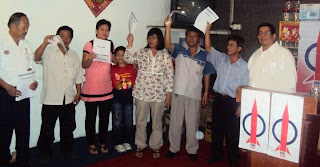 He said his team will try to revive the economy of this town by organizing an agriculture and food fiesta on a regular basis. He hopes to give incentive for farmers to work harder and at the same time attract more local people and tourists to Kudat.

YB Dr Hiew said that Kudat has lost an iconic structure which could have boosted its tourism potential. According to YB Dr Hiew, the Ma Tzu statue is not a religious structure at all where people will come and pray while bearing offerings. He mentioned about PAS-led Kelantan where the tallest Buddha statue stands amongst the temple and mosque.

The Sabah DAP Chief also concurred with Edward Lu that Kudat which is formerly a Sabah main town and now is moving towards the twilight zone. Except for Simpang Mangayau which is the tip of Borneo there is nothing much to see in Kudat.

There are so many interesting things to see and do in Kudat but the government is just not interested at all, he continued. YB Dr Hiew commented on the stretch of road from Kota Marudu to Kudat.

He said this road should not be called highway. This so-called highway is worse that the village roads in West Malaysia according to YB Dr. Hiew. The basic infrastructure such as road, water and power supply is so rudimentary and unreliable.