SABAH ILLEGALS FOR HIRE A WAY FORWARD, BUT.... 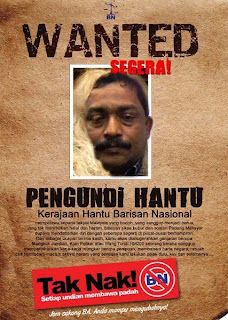 PUBLIC and private reactions in Sabah to the Human Resources Ministry's ‘Illegals For Hire’ proposal are pouring in thick and fast, many openly furious, if not bordering on unbridled outrage. There are a few bouquets too among the many brickbats.

The Federation of Sabah Manufacturers (FSM) for one, no doubt having only ringgit signs in its eyes, is all for the proposal by the ministry, which appears to have been made in good faith, if not politically naive.

The Umno-led federal government in Putrajaya can hardly contain itself in sheer joy, and has been prancing about, unmindful of the potentially devastating effect at the ballot box in their electoral Fixed Deposit state.

Just one stroke of the pen could end the illegal menace in Malaysia forever. This wholesale whitewashing is no mean feat, for no government in the world has yet accomplished this miracle of bureaucracy amidst all the red tape, politics and the explosive mix of race and religion.

The illegal’s who will be courted anew by the authorities and potential employers are those yet to land a MyKad through such politically devious tactics as ‘Project M’ named after former Prime Minister Mahathir Mohamad, to be entered as ‘Fixed Deposit’ in the electoral rolls. However, not all MyKad holders under Project M are free to leave the state, for their identity cards are only good for voting in Sabah.

There are others like Pakistani carpet-dealer Salman Majid, 48, who is free to go in and out of Sabah. He has even been declared ‘Malaysian’ by the courts, thanks to 'witnesses’ like former Sabah Chief Minister Harris Salleh.

Salman is now suing the Malaysian authorities for ‘wrongful detention’ at the immigration depot in Kuala Lumpur pending deportation to Pakistan and for RM1 million allegedly missing from his bank account. Salman was born in Pakistan but he never admitted this, except to say that he was not in the country for 23 years, and has been entered in the official records as born in Ranau, Sabah.

This proves, according to cynics like Kedah-born author, Mutalib M D, that "it's possible to be born twice", at least in Malaysia.

Likewise, Indian restaurant keeper Mohd Kani Majid, 44, was quietly released from detention in Menggatal, Sabah, earlier this year despite admitting in court that he was born in India. He deliberately stated in his ‘Project M’ application form, along with 100 other Indians and Pakistanis in his group, that they were born in Sabah.

Kani's release came just two days before a court case where his lawyer Joseph Pereira planned to prove that under Article 27 of the Federal Constitution, even ‘Project M’ holders of the MyKad cannot be deprived of their ‘Malaysian citizenship’ without going through an arduous process.

Pereira concedes that the authorities could have used the simpler argument of fraudulent misrepresentation of the birthplace as sufficient grounds to revoke Kani's ‘citizenship’ and deport him, but apparently they failed to do so and fell into Pereira's trap ‘to prove that ‘Project M’ is no fiction.

Lawyer Karpal Singh, representing Salman, earlier laid the same trap for the authorities. Salman was out in a jiffy, like Kani, and both are very indignant that they had been so shabbily treated by the authorities; ‘in the land of their bureaucratic birth’, just because they reportedly stopped greasing a few palms now and then. This is a sunrise industry for those who believe in ‘skim cepat kaya’ (quick money scams).

So, it's not surprising at all that the catch in the ‘Illegal’s For Hire’ proposal is that it promises to be a hot political potato in Sabah. This is a state where the main concern among the natives, the Christian majority, is disenfranchisement think Salman, Kani and others like them from the Philippines and Indonesia, at the hands of local Muslim proxies of the ruling elite in Putrajaya.

Former Malaysian Human Rights Commission vice-chairperson Simon Sipaun thinks it’s time to call a spade a spade. Disenfranchisement, according to him, is disenfranchisement and should no longer be ‘swept under the carpet’.

Activist Dr Chong Eng Leong warns that resorting to the illegal’s for labour is a desperate move that will open the floodgates to a veritable invasion of miserable, hungry and impoverished hordes from the neighbouring Philippines and Indonesia in particular, if not from Bangladesh and Pakistan, further afield.

Even Chief Minister Musa Aman, a Pathan-Dusun, sees the proposal as a non-starter although it has been endorsed by the FSM. He wants ‘studies’ to be conducted on the proposal.

While there is more than merit in such concerns, it cannot also be denied that human trafficking is also an equally vexatious problem. The authorities are unsure, despite recent laws, where the line lies between people smuggling, human trafficking, white slavery, illegal immigrants, refugees, ‘instant’ natives, economic migrants and foreign labour.

For years, the official line was a standard denial that Malaysia was a hotbed for human traffickers, the ugly face of a trade that rivals terrorism and money laundering.

Mounting evidence to the contrary, produced by the United States, Australia, Christian NGOs in Indonesia and other NGOs in Malaysia, forced authorities in the country into a face-saving about-turn. But therein the matter continues to lie unresolved.

The idea that employers in Sabah should look to the million-odd, overwhelmingly Muslim illegal immigrants in the state to solve their perennial labour woes is a variation of the old limited amnesty theme. This is trotted out every few years amidst media hype, much hope and wishful thinking.

Amnesty was tried before but failed spectacularly because the labour recruiting agencies, all politically-linked like the loan sharks and illegal bookies, want their pound of flesh. Therein also lies the roots of illegal immigration, attracted by ‘the streets of Malaysia are paved with gold’ fairy tale spread by people smugglers. These economic saboteurs continue to brave the high seas in rickety boats to cash in on a lucrative trade in cahoots with people in authority.

An amnesty in Sabah for illegals was postponed from August last year to October, then to December and has no more been heard of. No raids are being conducted against the illegal immigrants because the detention centres are full.

Illegal immigrants have wised up

Employers are also all howling in protest and threatening to withhold their generous monetary contributions to the political parties.

Besides, the illegal immigrants themselves have wised up over the years and now refuse to pay anyone in uniform, as in the past, to remain free. Their sheer numbers protect them from the long arm of the law. The street children, abandoned by their parents in most cases, happily run amok in the streets of Kota Kinabalu and other major towns.

The Human Resources Ministry appears to belabour under the misconception that the illegal immigrants in Sabah are all criminals, unemployed otherwise, and eagerly waiting to jump on its labour recruiting bandwagon in the state.

An estimated 65,000 jobs are going abegging in the state at the moment, according to the ministry. One reason is that underpaid Indonesian oil palm pickers in Sabah are returning in droves to Kalimantan, where they are paid very much better by Malaysian companies. Sabah and Sarawak are in real danger of being eclipsed by parts of Kalimantan in the next 10 years.

Even so, it seems that employers still find local workers ‘unreliable’ and prone to chronic job-hopping because they ‘unreasonably’ demand such things like a living wage for a start.

This is something that is also being increasingly demanded by the illegal immigrants, who are not too averse to moonlighting as underworld operatives, smugglers and illegal farmers on state and private land. Even among illegal immigrants, there's a limit to subsisting on Maggi mee alone, morning, noon and night and living 10 to a room. Maggie mee has also been getting more expensive over the years from the initial 25 sen a packet.

Living costs in Sabah, as in Sarawak, are very much higher than in Peninsular Malaysia blame the National Cabotage Policy, among others while salaries are very much lower, thanks to the illegal immigrants. This is a double whammy for Malaysians in Sabah and Sarawak, Umno's electoral ‘Fixed Deposit’ states.
Posted by sabahkini.net at 09:29