PBS MINISTERS ARE DEAF AND DUMB? 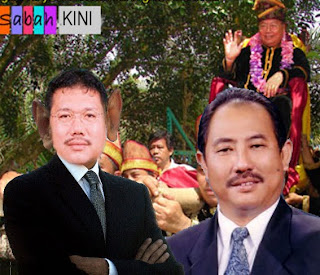 SABAH Progressive Party (SAPP) chided Parti Bersatu Sabah (PBS) for trying to paint a rosy picture to an otherwise blurry situation in terms of the illegal immigrant issue in the State.

Information Chief, Chong Pit Fah said his PBS counterpart Datuk Johnny Mositun’s statement that PBS had never wavered from its stand on the illegal immigrant issue in Sabah is not what it is perceived by the grassroots.

“SAPP found the general feeling of the grassroots is not like what Mositun has said. In fact there is so much concerned among the grassroots that the BN leaders particularly PBS suddenly become voiceless and seems to be lost in the issue of addressing the illegal immigrant problem.

“Why PBS government ministers are deaf and dumb? Why is the PBS Information Chief say something but those in the government not doing anything on the illegals?” he asked here Thursday.

Mositun was reported on Thusday in his response to the statement by SAPP President Datuk Yong Teck Lee that PBS had never wavered from its position on the issue and that Yong had drawn the wrong conclusion on this from remarks that he (Mositun) had made about the regularisation of illegal immigrants.

Chong said that based on Mositun’s statement calling for the state and federal authorities to stand firm on detaining and deporting illegal immigrants so as not to compromise the nation’s sovereignty and security, it actually suggested that the state and federal authorities were not firm in addressing this problem all this while.
As for SAPP, Chong said the issue of illegal immigrants is among the party’s 14 Points on Sabah issues that is “the government must embark on an immediate action plan to solve the illegal immigrant situation in Sabah, including the syndicated My Kad and other dubious documents, that has been a source of unhappiness among the people”.
The only response from the Federal Government on this was the formation of a Federal Cabinet Committee in 2004, which SAPP felt as mere window dressing exercise by the Barisan Nasional (BN) Government.
Chong said it was also inappropriate for Mositun who is also a Deputy State Speaker to be dwelling too much on policy matter and politics in view of his position in the August State Legislative Assembly.
“We know he is the information officer of his party but he is also a Deputy State Speaker and the position requires him to be fair. He should not be bias,” he said, adding that otherwise it would be unfair for SAPP’s state assemblymen and the people they represented.
Posted by sabahkini.net at 18:51