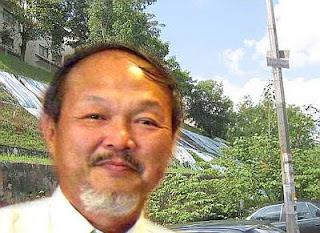 THE recent many collapse of the hill slopes into houses and properties had caused major concern among owners in Kota Kinabalu, and many had brought up their worries with the Member of Parliament Kota Kinabalu Dr. Hiew King Cheu.

Today, the MP and his team visited a few sites where there are some high potential of hill slope failure and collapsing may occur after receiving complaints and request to check. It is obvious in some areas where there are serious movement in the unstable hill slope and sign of cracks appearing on the ground surface.

The serious but lucky case of hill slope collapsing and sliding towards the housing in the Taman Bukit Saujana, in Likas was just like a ‘close-shave’. There would be a major disaster if not of a pond receiving the thousand ton of earth in between. There is a pile of four feet high of wet mud and earth just stopping a few feet short from the back door of the row of terrace houses.

Hiew asks whether the committee form by the JKR, DBKK, Bomba and Rescue, and other authorities and departments including professional bodies on the slope observation and collapse prevention is still in full operation. If not the committee should be reactivated immediately to provide check on all hill slopes before any disasters hit.

After checking with several government departments and authorities, there are land laws, enactment and guidelines on the safety of the landed properties which are to be followed strictly by the land owners. Any earth moving, filling and cutting of hill slopes permission must be given by the authorities before is work allowed to commence. The land owner must ensure that their land is kept safe and will not create nuisances to the neighbor and others.

Hiew reminded that there are still many ‘dangerous’ slopes out there and it would be worth while to check if some is going to fail and should make remedy work immediately, ‘prevention is better than cure’.