RELOCATING MAZU IS NOT THE ISSUE 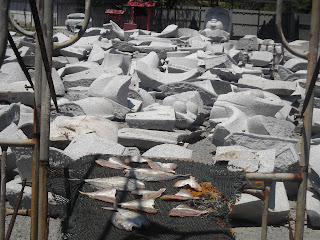 FORMER Sabah Chief Minister, Tan Sri Chong Kah Kiat sees his successor Musa Aman dredging up an old offer to relocate the aborted Mazu, Goddess of the Sea, statue in Kudat, as an attempt to show his magnanimity.

"He (Musa) also wants to show the people that I was the one being unreasonable," Chong added in an exclusive interview.

Musa's offer, without any specifics, follows in the wake of the Federal Court's non-interventionist stand on Monday.

"Relocation is just an afterthought, an old one at that, after the state government realised that it had legally and politically bitten off more than it can chew," said Chong.

The former Chief Minister said the offer was not made out of sincerity "if you study the history of the Mazu project". It was made, he noted, to save Musa politically in the eyes of the people.

Chong, who isn't surprised by the renewed relocation offer, said that he had pointed out many times that the issue was not relocation and therefore the question of accepting or rejecting it did not arise.

"If I accept the offer, then it simply means that my original site was wrong. How can it be when I have done no wrong?" reiterated Chong. "Again, if I accept the relocation offer - thereby admitting that I was wrong in the first place - why should the state government offer to compensate me?"

On several previous occasions the state government had publicly offered to compensate Chong for the works carried out so far on the existing Mazu site and the relocation costs.

But Chong sees the state government compensating a person who has done something wrong in the first place as being reckless with the people's money and an abuse of public office.

He reiterated that he does not want to be compensated if he has done something wrong. Instead, he wants to be "punished by law" as an example to others. "Unfortunately, the court was prevented from deciding that."

The former Chief Minister feels that the chief minister and the state attorney-general should have stayed the course in the High Court and if necessary, to the Court of Appeal and the Federal Court.

The state government, according to Chong, should convince the court that the grounds that they used to stop the Mazu project, and then cancel the approval, are sustainable in law.

"The non-registration of the Kudat Thean Hou Charitable Foundation - linked with the Mazu project through me, its chairperson was not the grounds on which the approval granted legally by the Kudat Town Board was withdrawn and then subsequently cancelled," said Chong.

Issue is 'just to spite one man'

He says the issue is abuse of public office "just to spite one man... Chong Kah Kiat".

He draws this conclusion from the fact that the Mazu project is a private project on private land and privately financed in an area zoned for tourism. He however declined to go into the alleged bad blood between him and his successor.

The state government, Chong stressed, used the issue of locus standi to bring the proceedings in the High Court to a halt. Since the foundation is not registered, and Chong is its chairperson, he was deemed as having no business to take the state government to court on the Mazu project.

"How come I suddenly have no locus standi when the various state authorities have been dealing with me all along on the project? asked Chong. "Why deal with me if I had no locus standi?"

The Foundation's non-registration, he pointed out, was a separate issue from the halting of works on the Mazu statue project.

"The High Court, if it had been allowed to proceed with the case, would have heard that it was me that was putting up the Mazu statue," said Chong. "They would also have heard that this case also involves gross abuse of power and public office."

Both these two issues, continued, Chong, would not be heard in the High Court now after the Court of Appeal and the Federal Court were used to throw a spanner in the works.

Looking ahead, the former chief minister expressed confidence that "my Mazu will stand up one day, if not during my time, then after I am gone".

At the moment, the statue lies 95 percent complete on its original site in Kudat. Chong had previously publicly toyed with the idea of completing the Mazu statue and letting it just lie on the site with a signboard for visitors which reads: "Here lies a statue to Mazu which was not allowed to stand up".

If the Mazu is not allowed to stand up, said Chong, then "that doesn't mean the Mazu can't lie down either".

In the meantime, in the wake of the Federal Court "decision not to decide", he wants the people of Sabah to "open their eyes and see what kind of state government and state leadership that they have now".