BN MINISTERS ARE LOST ON ILLEGALS 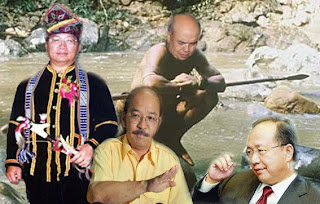 PBS leaders who voiced objections to the proposal to employ illegal immigrants as workers should not forget that the proposal is a direct result of PBS President Tan Sri Joseph Pairin Kitingan’s call in February to include illegal immigration in a ‘special laboratory’ under the ‘National Key Results Areas’ of the Government Transformation Programme.

In fact, on 25 May 2010, PBS Publicity Chief Datuk Johnny Mositun had called on the government to ‘regularize these workers officially’ when he voiced objections to the federal government’s intention to raise foreign workers levies.

This was echoed by the Chief Minister on the same day who had said that the proposals from the State government labs on foreign workers would be finalised by end of May. Therefore, PBS Vice President Datuk Herbert Timbun Lagadan who is an assistant minister should not be ignorant on how the proposal to employ illegal immigrants came about.

Herbert mentioned the Likas election petition brought by the PBS candidate on phantom voters. At the trial from 1999 to 2000, PBS’s own witness had testified that I was not involved in the illegal IC or phantom voters.

I was the victim of the failure of the Election Commission to ensure clean electoral rolls. In fact, PBS’s witnesses had identified UMNO personalities in the illegal IC racket. These are all on the record.

Therefore, Herbert should ask his UMNO bosses if he truly wants to know more about the illegal immigrants and phantom voters in Sabah. As for the Gaya Island voters, Herbert should know that Gaya Island have been transferred to Tanjong Aru, a PBS constituency, for two elections ever since 2004.

Is Herbert so blind to think that phantom voters existed only in the 1999 Likas electoral rolls and not in any other constituency, such as those represented by UMNO? Why do Herbert and other PBS leaders dare not touch on UMNO constituencies?

The combined police-military operations under the auspices of the National Security Council managed to deport tens of thousands of illegal’s in a few months, with countless thousands who preferred to return voluntarily. It was the first time that the superior logistical capability of the military was called in to help deport illegal immigrants.

As the operations were done with the advanced knowledge and co-operation of the neighbouring countries in BIMP-EAGA, the deportations were orderly and effective. Credit goes to the close co-operation between the federal and state governments and law enforcement agencies, including the National Security Council and Ministry of Foreign Affairs. Sad to say, these efforts were not continued.

SAPP repeats our calls to the BN leaders to get their act together and be focused on their duties to resolve the illegal immigrants issue on a comprehensive basis. It is distressing to see that the BN federal and state ministers are lost and directionless. Each day, some BN minister or party leader says something different that confuses the people.