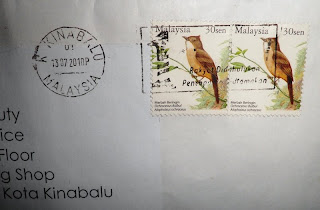 THE expensive postage charges have been the constant complaints received by the Sabah DAP offices and the Semenanjung Malaysia counterpart.
A question was raised by the DAP MP for Bakri Er Teck Hwa during the last Parliament session on why the postage charges had increase by more than double and near three times in Sabah and Sarawak. In Semananjung, it is an increase from the original RM0.30 to RM0.60 and in Sabah it is RM0.30 to RM0.80 starting on July 2010.
The Minister of Information, Communication and Culture replied that the previous postage rates were used since 1992 which is too low and has affected POS Malaysia when the international system of ‘Terminal Dues’ was implemented in 2010 in the whole world.
This has created big negative impact to Malaysia in handling the international mails with relation and subjected to the foreign exchange rates which affect the cost of postage, and the subsidy given on over sea mails.
Under the new Terminal Dues system, POS Malaysia has to shoulder the high cost of operation in handling the over sea mail. At the same time, POS Malaysia is receiving payment far lower with the local mail compared with other countries.
The restructuring of the postal service rates will help POS Malaysia to cope with the cost of operation and uplifting of its service. This rate increase will not affect the people because the people can still use the domestic aerogram (Mel Rakyat) which is launched on the 22nd April, 2010.
Dr. Hiew views the explanation didn’t answer the complaints of the people especially those in Sabah and Sarawak. The extremely high increase did not justify by the explanation provided by the minister. Why we have to pay RM0.80 postage for a local mail, claimed one person from Damai, Luyang? The post office is becoming a business company and no longer a public service. Where is the subsidy for the postal service enjoyed by everyone?

Even though they have to increase the rates, it should not be that high and at one go? May be it is because the postal service is under privatization now, and any increase in the rates means extra profit to the company. In this case the people who use the post service will have no say but just have to pay more.

Therefore, Sabah DAP urges the POS Malaysia to reconsider adjust the rates, and to lower the rates for the postage in Sabah and Sarawak to be the same as Semananjong and not more. The BN’s ‘1-Malaysia’ concept will definitely remains as talk only and cannot stand up the way they wanted it to be, where got 1-Malaysia?
Posted by sabahkini.net at 23:02