PENINSULAR SHIPOWNERS ON THE CARPET 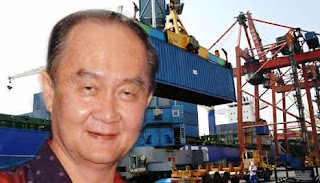 THE Federation of Sabah Manufacturers (FSM) has challenged Peninsular Malaysia-owned shipping firms to prove that the National Cabotage Policy (NCP) has indeed benefitted Sabahans and therefore should be retained. The NCP currently reserves carriage within Malaysian waters to locally-owned ships only.

FSM's dare follows a public statement from the Malaysian Shipping Association (Masa) alleging that FSM was being 'irrational on the NCP and was in fact sensationalising it'. Masa's statement coincided with Prime Minister Najib Abdul Razak's visit to Sabah over the weekend for talks with Sabah's Chinese business community among others.

FSM President Wong Khen Thau stressed the association was only speaking the truth in the interest of all Sabahans. If Masa wants the NCP retained, it should be confined to Peninsular Malaysia and not include Sabah and Sarawak as well, he said.

"If telling the truth amounts to sensationalising the issue, then it's totally unacceptable. What we want is for the NCP to be fully liberalised," said Wong. "Even the prime minister agreed with us on Sunday in Kota Kinabalu that the policy should be reviewed".

Doing away with the NCP, continued Wong, would also be in line with the Najib Administration's 'People First, Performance Now' and '1Malaysia' themes. At present, it is said, Malaysia was a country with three pricing systems for shipping ie. one for Peninsular Malaysia and the other two, much higher, for Sarawak and Sabah respectively.

Briefly, the FSM thinks that scrapping the NCP would enable shipping lines in Sabah to compete on a more level playing field. It would also make up for the lack of tax incentives for the manufacturing sector in the state, according to Wong.

"It must be noted that Peninsular Malaysia -based shipping lines receive full support from the federal government".

For the first time, the FSM president also disclosed that several companies in Sabah had, in fact, gone bankrupt because of the NCP alone and no other factor. These firms apparently include those in the shipping business.

The FSM had all the details on such firms, he said, and could brief Peninsular Malaysia-owned shipping firms who were interested to know the facts about living and doing business in Sabah.

Ironically, the Transport Ministry has come to the side of Masa and is claiming that shipping firms in Peninsular Malaysia would go bankrupt if the NCP was abolished, noted Wong. This has led FSM members to debate what such firms have achieved after more than 30 years of protection by the federal government.

"The NCP was supposed to help the local shipping firms in Peninsular Malaysia to build up their capacity and compete," said Wong. But it looks like the moment the NCP ceases, these firms will close shop".

The FSM president hopes that the bankruptcy scenario painted by the ministry will not materialise. However, he said he was duty-bound as a Sabahan to question the worth of maintaining a policy at the expense of his home state, and neighbouring Sarawak, for so long.
That the policy has failed the two states and for Peninsular Malaysia-owned shipping firms as well, "must now be accepted by the federal government and the ministry".

"We must not forget that industries in Sabah are not progressing because of the high cost of doing business in the state," said Wong in renewing FSM's central theme. "We are not just talking about consumer goods being more expensive in Sabah or Sarawak."

Industries in Sabah, numbering about 1,000 at present according to FSM figures, are not exempted from tax unlike in Peninsular Malaysia. The luckier ones, he revealed, get pioneer status for five years and seldom the ten years which is generally the norm on the other side of the South China Sea.

'Very cosy for them'

The bottom line is that FSM wants the federal government to sit down with the state governments in Sabah and Sarawak 'and review the NCP in the interest of the people in the two states'.

"Don't just consider the interest of a handful of local shipping firms in Peninsular Malaysia only," warned Wong. "This matter must be brought to a close and the sooner the better for the federal government too."

Unlike FSM, business people in Kota Kinabalu are generally not too hopeful the NCP will be reviewed in the near future. They don't read much into Najib's remarks at Sunday's luncheon meeting with the Sabah Chinese business community.

The widespread perception in Sabah is that the powerful shipping lobby in Peninsular Malaysia has the MCA-held transport ministry in its pockets 'and nothing will change".

Najib's exact words, it is being pointed out, were that he would have to 'see whether there are other implications' besides the obvious benefits of exporting and importing directly from Sabah and Sarawak.

The most compelling argument for the scrapping of the NCP comes from Kota Kinabalu-based industry analyst John Lo. He points to the growth of the tourism industry in Sabah by leaps and bounds in recent years after AirAsia and other airlines were allowed to bring in traffic directly to the airports in the state.

Malaysia Airlines, he recalled, had previously claimed for years that the Kuala Lumpur-Kota Kinabalu sector, for example, was unprofitable.

"If the NCP is abolished, a shipping line will emerge in Sabah and Sarawak along the lines of AirAsia," expressed a confident Lo. "Masa must grow up and become a global player and not try to fight tooth and nail to maintain an unjust arrangement just because they find it very cosy for themselves."

Bernama reports the United Pasokmomogun Kadazandusun Murut Organisation (Upko) has hailed Najib's assurance to look into the proposal to scrap the cabotage policy.

Upko Secretary-General, Wilfred Madius Tangau, said the policy was not market-friendly and less than transparent.

He said the government has been listening but 'the lobby from the shipping association was much stronger than the people of Sabah put together".

"One such proof is the high logistics cost. It has been shown that it is cheaper to transport goods directly from Sabah to Tokyo than Kota Kinabalu to Port Klang," he said.
Posted by sabahkini.net at 09:25