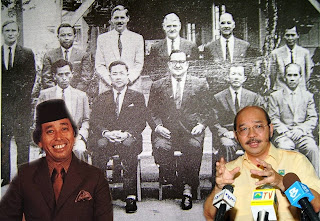 Harris is alleging that Yong insinuated in two press statements that he (Harris) had something to do with the air crash. The statements, according to Harris, were also carried on the official SAPP website.

The former chief minister is claiming general damages, and aggravated and exemplary damages of not less than RM50 million for libel from Yong, who is the first defendant, and from SAPP, which is the second defendant.

He is also seeking an injunction to restrain the defendants, whether by themselves or their servants or employee or agents, from printing and publishing further statements and similar libel in any form or means.

Lawyer Yunof Maringking, representing Harris, said this afternoon that the writ of summons was filed at the High Court in Kota Kinabalu on Monday. He declined to furnish Malaysiakini with a copy of the writ on the grounds that ‘the court would not be pleased with such an action’.

Yunof disclosed that Harris wanted to sue Sabah opposition strongman Jeffrey Gapari Kitingan as well on the same matter. However, he said he declined to take the case, without saying why.

According to Yunof, Harris is reportedly upset with Jeffrey over a statement in the local media that he (Harris) had signed away Sabah's oil wealth in 1976 in the wake of the air crash.

Harris is not going after former Petronas chairman Tengku Razaleigh Hamzah who he feels is an innocent party, added Yunof.

Revisiting the statements that initiated his legal action against Yong, Harris said in a media release yesterday that the former suggested ‘in their ordinary and natural meaning’ that he (Harris) conspired with others to assassinate Stephens and several state ministers.

Further, Yong's statements suggested that Harris conspired with others to grab power and become the chief minister of Sabah after the demise of Stephens by way of assassination.

Harris claimed that Yong's statements were politically motivated to tarnish his good name and standing in society for having signed the agreement whereby Sabah only gets 5 percent (oil royalty).

Harris said that he would tender as evidence at the trial a VCD, 'Lies in the Sky', produced by the Australian Broadcasting Corporation in 1995. The VCD apparently highlights the fact that the Nomad aircraft had air crash problems since the early 1970s due to defects, which Yong and SAPP knew or could have known by making proper investigation on the Internet.

He would also be relying on Chapter 21 of a book entitled, 'The Life and Death of Tun Fuad Stephens', produced by the family of the late Stephens wherein the Nomad aircraft's problems since early 1972 had been highlighted, without insinuation of or suspecting the notion as portrayed by Yong and SAPP.

Harris conceded that he and Yong have been long time political rivals. As an example he cited the election petition he filed after the general election in 1999. This resulted in Yong's disqualification to contest in a by-election for the state assembly for N13 Likas and other elections.

Yong, who is also a former Sabah chief minister, was earlier warned in a May 5 letter this year from Yunof that Harris would be initiating legal action against him for the two statements and wanted to know the name of the legal firm which would accept the writ of summons on his behalf. A copy of the letter is available on the SAPP website.

The said statements, according to Yunof's letter, were published in the Daily Express on April 5 this year under the heading, 'SAPP wants file on triple six tragedy probe re-opened'. This was followed by another article in the same local newspaper on April 9 under the heading, 'Basis to re-open due to new info: Yong'.

In the April 5 statement earlier, Yunof noted that Yong uttered: "It is also time to re-open the investigation in the June 6 air crash so that all doubt about the true causes of the air crash are removed".

Yunof cited the following words, among others, in the April 9 statement: "Sabah Progressive Party (SAPP) president Datuk Yong Teck Lee said it is to be expected that the people will want to re-examine the June 6, 1976 air crash in light of Tengku Razaleigh Hamzah's memory of the tragedy".

Yong allegedly drew parallels with the deaths of Kennedy, Martin Luther King, Benazir Bhutto and Princess Diana which are the subject of continuous study.

He appears to have implied in his April 9 statement, according to Yunof's letter, that Stephens' death should be studied likewise.

In that case, Yunof noted that Yong conceded that "maybe nothing new will come out of the re-investigation" or "maybe something big and explosive will emerge from the depths of history".

Yong could not be reached for comments. A SAPP spokesman at the party headquarters in Luyang said that it may issue a press release soon on the matter.

Jeffrey (left), when contacted this afternoon, confirmed that he had not been served with any letter of demand from Harris or writ of summons. He does not know why Yunof refused to handle Harris' case against him.

All he knows from reliable sources is that Yunof told Harris to look for another lawyer if he wanted to go after him (Jeffrey). He declined further comment on the issue.