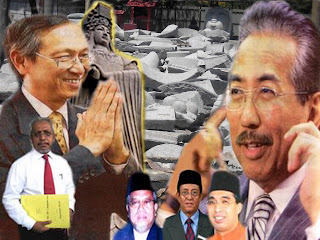 FORMER Sabah Chief Minister, Tan Sri Chong Kah Kiat wants to leave the fate of the aborted Mazu, Goddess of the Sea statue in Kudat in the hands of the people.

The million ringgit question whether the erection of statue will still go ahead lies unanswered.

"Let the people decide whether they want the Mazu statue to be up or otherwise," said Chong. "I will accept whatever decision they make. For my part, I have done no wrong in putting up the statue."

"Someone, either a court, a government body or an arbitrator has to decide on the erection of the Mazu statue. All of them don't want to get involved," he stressed.

"So far, no court has ruled that Mazu was illegal. So, now it's up to the people to decide Mazu's fate."

He has however reluctantly resigned himself to the fact that the courts in Malaysia don't want to get involved in his dispute with the Sabah state government.

"The Federal Court had not only deprived me of the legal avenue to seek redress but also denied itself the opportunity to hear out an aggrieved party," lamented Chong.

Chong's reaction follows the Federal Court hearing earlier this morning in Putrajaya which went against him. No reasons were given.

The five-man panel refused to grant him leave to appeal over a Court of Appeal ruling that he had no locus standi in the matter.

Nothing to prevent Chong from proceeding

Lawyers in the know in Kota Kinabalu say that there's nothing to prevent Chong from proceeding with the construction of the Mazu statue if the the Kudat Thean Hou Charitable Foundation, of which Chong is the chairperson, is kept out of the picture or, alternatively, getting it registered.

"This will bring the issue back to the arguments being presented in the High Court before the Court of Appeal intervened," said a senior lawyer who requested anonymity. "All is not lost. It's up to Chong to proceed."

"It's really up to Chong whether to accept the alternative site or still insist on the original site on the grounds that he has done no wrong."

A third lawyer sees the Mazu issue being resolved amicably, with the statue erected on its original site, after a change of the state government.

There has been no reaction as yet from the state government as the case at the Federal Court was only heard this morning.

The Mazu issue is expected to boost the public standing of the LDP in particular. The party has been very critical of the state BN and the state leadership for several months now.

Several of the party leaders have already been stripped of their government posts and there have been demands from Sabah Umno that the party hand back its seats to the ruling party.
Posted by sabahkini.net at 16:43