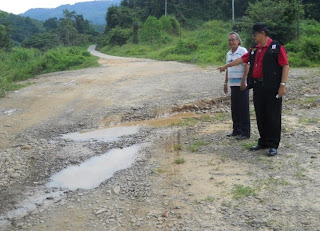 The roads entering to several kampungs, factories, mills, Keningau Vehicle Testing Center and plantations are in bad conditions. The road is impassible for small vehicles and causing public great inconvenience. The roads become even worse when it rained and it is extremely difficult for vehicle to pass and to get on to the main road.

Dr. Yapp and Voon witnessed the vehicles on the road at the time of inspection, and found the road is a busy public road used by many kampung people. The roads were full of large and deep pot holes with mud and water everywhere. They were being informed that the road was never been repaired for many years despite the villagers were promised by the authority concerned.

Sabah DAP feels that the BN Government and the Member of Parliament for Keningau has not done their duty to take ensure that the people enjoy good roads. They should take immediate actions to repair and upgrade the bad road conditions without further delay.

The people complained as to why Billion of Ringgit was allocated for rural road development in Sabah, but the situations at Jalan Ulu Patikan, Keningau is still one of the worst roads in the interior of Sabah.