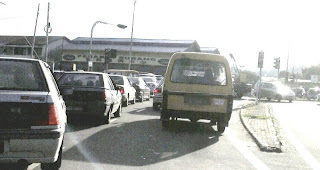 IN order to maintain the efficiency of city traffic light management, John Lee Kim Seng the Sabah DAP Infrastructure Bureau Chief urges PWD to check on the reason for the frequent break down, especially during rainy days and get to solve this problem immediately.

Mr Tshen a resident of Penampang, who relies on Jln Kobusak to commute to work daily, and many students who uses this road to travel to school are always frustrated with the Kobusak Traffic light, near a Shell petrol kiosk which always malfunctions and caused massive traffic jams, resulting in extra consumption of precious fuel and inconveniences.

Ironically, the unreliable faulty traffic lights have become a norm the past few months. Very often it takes PWD quite a long time to fix the traffic light whenever its breaks down. It is a major concern for the Penampang road users here.

Normally in situations on the malfunction of the traffic light, there should be a built-in back-up system or automatic-controlled unit that puts yellow flashing light as a warning, so that motorists can know and act accordingly.

But in this case, it is totally black out, the heavy flow from all directions causes very messy traffic jam. The traffic from both directions may not notice the traffic light failure and it increases the chance of accident and risking loss of life.
Posted by sabahkini.net at 21:52