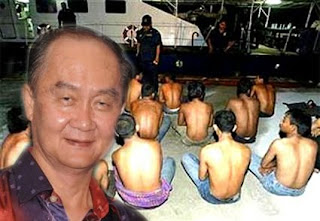 SABAHANS are dead set against illegal immigrants in the state being whitewashed by the federal government for the job market and want them out of the state. However the Federation of Sabah Manufacturers (FSM) is publicly pleading that Sabahans “think with the head, not the heart” on the issue.

FSM president Wong Khen Thau pooh-poohs local fears that hiring illegal immigrant labour would in fact open the floodgates and encourage an even greater influx. He pointed out that only illegal immigrants already in the state would be hired, and not those who come in after a cut-off date. He also called for a strong government machinery to prevent a renewed influx of illegal immigrants.

“At the same time, we are not going to hire just any Tom, Dick and Harry,” pledged Wong. “Only illegal immigrants with the right kind of skills will be hired.”

He does not expect this category of illegal immigrants to number more than 500,000 people.

The FSM chief was vague on the specifics of how the “hire illegals” move would work out in actual practice. He's hoping that the Human Resources Ministry, which endorsed the idea first proposed by the Laboratory on Illegal Immigrants, will come up with the right answers.

Wong is confident that hiring illegal immigrants would help address the perennial issue of illegal immigration, since the authorities, “as elsewhere in the world”, apparently could no longer cope with it.

FSM estimates that it would take 87 years to deport all the 1.75 million foreigners including illegal immigrants in Sabah, who outnumber the 1.5 million locals. The deportation rate assumes naively, say critics that no new illegal immigrants enter the state during that period.

Wong has his own take on a widely prevailing notion that illegal immigrants already in Sabah are either self-employed or work somewhere as hired hands or as daily casual labour.

He's convinced that most illegal immigrants in the state live in a twilight zone, and run a parallel black or underground economy. “If you don't control them, they are free to do anything,” ventured Wong. “If they commit a crime, you don't know where to find them.”

The only way out of this continuing dilemma, according to Wong, is to offer them amnesty, regularise, document and offer them jobs “so that we will know where to find them”. He says the locals can supervise the illegal immigrants, but only if they dropped their opposition to the latter being hired as labour.

Wong warned that labour is badly needed in plantations and construction in particular as Indonesians return to a newly-booming Kalimantan. Locals are not interested in these sectors, continued the FSM chief. And they also don't want to wash dishes, mow the lawn, scrub toilets and do similar jobs. He reasoned that locals would rather skip the 3D jobs; dirty, difficult, and dangerous than risk “losing face”.

The FSM risks being the only one supporting such a plan.

For starters, the Sabah chapter of the Malaysian Trades Union Congress (MTUC) disagrees with the assumption that local employees only favoured certain jobs.

“By resorting to illegal labour, employers are already avoiding the levies, and contributions to the Employees Provident Fund (EPF) and the Social Security Organisation (Socso),” said Sabah MTUC chairperson Simon Yayun Lamadas. “The FSM does not have any figures on the number of unemployed, if any, illegal immigrants.”

Lamadas lamented that the failure to send back the illegal immigrants during the amnesty period late last year “had encouraged them to (remain) in the country”.

Even Umno, in the spotlight over the long-running scandal on the issuance of MyKads to illegal immigrants for electoral purposes, considers the issue as very sensitive. “Hiring illegals is an idea which can backfire,” said Sabah Umno Youth chief Azman Ruslan. “The matter should be studied very carefully as suggested by the chief minister (Musa Aman).”

He thinks that the state government should not be seen as legalising the presence of illegal immigrants in the country by officially allowing them to work.

Parti Keadilan Rakyat (PKR) activist Chong Eng Leong (left) is vehemently opposed to the idea of hiring illegal immigrants instead of recruiting foreign labour legally. He adds that the incidence of communicable diseases in Sabah will sky-rocket if the flood-gates are opened. “It's really a ridiculous policy if implemented,” said Chong. “This shows that the federal government is really without direction.”

Chong pointed out that no government in the world has a policy of welcoming and encouraging illegal immigrants to join the regular workforce. He suspects the federal government has a hidden agenda in Sabah. He takes issue with the official statistics on the population of Sabah and the growth rate.

State Health Department director Yusof Ibrahim admits that Sabah has the highest incidence of tuberculosis and thalassamia in Malaysia.

Former Malaysian Human Rights Commission (Suhakam) vice-chairperson Simon Sipaun wants the federal government to send back all illegal immigrants in Sabah or distribute them equally among all the states in peninsular Malaysia. “The need for labour including foreign labour must be kept separate from the issue of illegal immigration,” said Simon. “If we offer jobs to the illegal immigrants, it will be seen as condoning illegal entry, and more will come.”