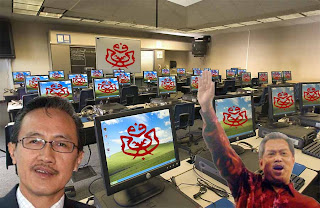 THE Education Ministry has assured, yet again, the Sabah government that it would complete the balance of 297 schools' computer labs throughout the state, after only three had been been finished in a span of three years.

Education Minister Muhyiddin Yassin had to trek to Kota Kinabalu in person this Monday, to update himself on the dismal state of the job.

“The problem is the failure of the contractors to comply with their obligations,” said Muhyiddin after being briefed by state Tourism, Culture and Environment Minister Masidi Manjun, who also handles education.

“We will complete them within the next few months,” assured Muhyiddin, saying the Education Ministry is taking a serious view.

“The main thing is that the situation is now being addressed,” he said.

“Frankly, I'm not happy because these labs were supposed to have been completed and delivered, but obviously that has not been happening.”

It is learnt that the Public Works Department will take over the task of completing these labs.

The takeover process is apparently being worked out, and it is unclear if the State Education Department (SED) will be brought into the picture this time, unlike the previous case where the contractors, according to Masidi, were directly appointed by the Education Ministry.

Also, Masidi's beef is that the Education Ministry only has funds for 250 out of a planned 300 computer labs. And of these, the three that have been completed are in danger of becoming white elephants.

Meanwhile, there are schools who have also received the computers in the absence of ready labs, risking the equipment falling into disrepair through misuse or neglect.

“It is not easy to implement Education Ministry projects in Sabah if the contractors from Peninsular Malaysia don't understand or accept the realities in the state,” said Masidi. “Many rural areas which are supposed to have computer labs don't have electricity supply or telephone links.”

Present Education Ministry rules and regulations also do not rule out paying contractors on time and ahead of schedule, even when they have fallen behind on the job, he noted.

The result, according to Masidi, is that the computer labs are in various stages of completion i.e. from 20 percent to even 90 percent.

He suspects that many of the contractors concerned have too many projects to handle, and cannot cope with their workload.

“It's best to offer such jobs to local contractors because they know the situation better, they can get the job done and thirdly, it will save the government the money spent on the re-tendering process or rescuing the projects,” said Masidi.

He wants the SED to list down all failed projects in schools and submit a proposal to the Education Ministry on how best to deal with such problems.

The state minister hopes that the federal government remember the lessons learnt from the failed computer labs project, when awarding future contracts in Sabah to Peninsular Malaysian companies.

He also advised non-Sabah firms bidding for Sabah jobs not to bite off more than they can chew.

One criticism is that the SED, reportedly in a huff over the proposed computer labs, failed to pass on its concerns on the project to the Education Ministry, or alert it early enough to avert the present crisis.

Sekolah Kebangsaan (SK) Gentisan, Sepanggar, is one of the “lucky” three to have its computer lab completed three years ago. Ironically, it can't be used.

The lab, according to Parents and Teachers' Association chairperson Matsum Delapan, not only doesn't function but hasn't received its occupation certificate from the local authorities.

“The lab is of poor quality, and it's not safe for the students to enter,” said Kampung Gentisan Village, Security and Development Committee chairperson Awang Pasih Abdul Kahar.

“There are cracks all over the place and parts of the ceiling have either dropped to the floor or is hanging down. Also there is also no drainage around the lab to take away the rainwater.”

The other two schools with completed labs are primary schools in Inanam, on the outskirts of Kota Kinabalu. Sadly, their labs are also not functioning.

The computer lab fiasco in Sabah have not prevented the Information, Communication and Culture (ICC) Ministry from handing out 10,000 1Malaysia computer notebooks (below) in phases to eligible Sabahans.

This is part of the federal government's initiative to achieve a nationwide 50 percent internet penetration rate targeted for the end of this year, according to the ICC Ministry.

One of those eligible to receive the notebook was a Bonggi tribesman, Taraib Saib, 84, who received his new toy last Friday from ICC Minister Rais Yatim in Karakait, Pulau Banggi.

Taraib qualified as a rural dweller earning less than RM5,000 per month. Urban dwellers must earn less than RM3,000 per month. Most of the recipients are in fact secondary school students. They must be willing to subscribe to broadband access from existing internet providers.

The current broadband penetration rate in the country is 37.7 percent covering six million households. The target for Sabah this year, however, is 30.1 percent, up from the present 17.3 per cent, according to the ICC Ministry.